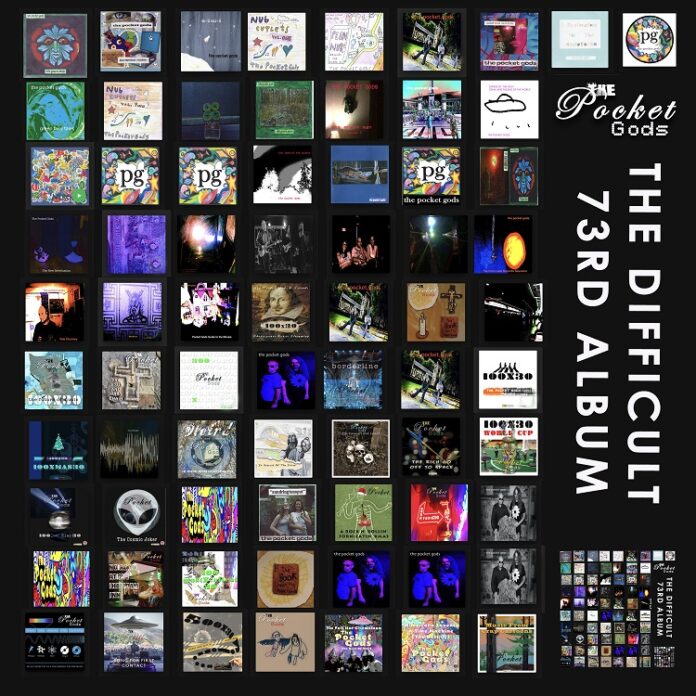 The Pocket Gods are a cult British indie pop band from St Albans. Formed by Noel Storey (keyboards & sideburns), and frontman Mark Christopher Lee, back in 1998, whilst working at Tower Records in Piccadilly Circus in London. They were originally an alt country band (and even had a pedal steel player) before they were misappropriated by bearded Hoxton hipsters into the eccentric wonders they are today. They hold four Guinness World Records including “most tracks on a digital album” and most recently “the world’s longest song” (a track about making first contact with extra-terrestrials that is some 48 hours long). They have their seventy third album out this month and unsurprisingly it`s called `The Difficult 73rd Album`.

The album opens with a re-recorded version of their classic `Sunny Day` and it`s a wonderful upbeat slice of sunshine in these dark Autumnal days. An indie earworm that had me in mind of the sadly missed The Weather Prophets and it`ll have you singing along with the simple chorus of “Sunny Day”. We have a more lo fi pop musing with `genuine` with it`s a times quite breathy vocals. A song that rhymes “it doesn`t matter what song you sing, as long as you are genuine” class.

Although i`m a vegetarian I loved `beef belief` which had a delightfully repetitive hypnotic guitar riff and vocals that almost seemed to be coming from another place entirely. A bizarre but captivating jazzy kind of stream of consciousness put to music. There was a more unconventional off key garage rock texture to `riding the waves` which had a mesmerising “moth to the flame” appeal.

The band are massive fans of cult film This Is Spinal Tap and their song `I’m As God Made Me Sir` is taken from a line from the film. It`s a sort of dreamy trippy trance like pop outing which seems to be encouraging us to embrace each other`s differences and love each other, which isn`t such a bad thing. Their love of the movies is also seen in the track `nothing to see actually we’re inside a Chinese Dragon` which was inspired by the Peter Bogdanovich comedy What’s Up Doc? It`s what I’d refer to as a driving song, a number that had a Madchester baggy texture about it and as to the lyrics…. who knows?

`gingham style` is the band`s Hertfordshire answer to the South Korean Psy`s dance pop phenomenon with instead of “Eh Sexy Lady, Oppan Gangnam style” we get the more middle England “cream teas in the countryside” delightful. We have a surreal tribute to the late comedienne Victoria Wood with `sperm through a sash window` which has a continual background musical lyrical loop with further lyrics shared through what sounds like a megaphone, bizarre but beautiful.

Frontman and songwriter Mark Christopher Lee wrote a lot of the songs whilst spending time at the coast in Norfolk and Suffolk and this is reflected in `loneliness of a lowestoft lifeguard which is a quite hazy come illusive offering which I have to admit lyrically passed me by. Apparently `reaching into the universe` references graffiti artist Banksy’s latest creations which appeared over the Summer in Lowestoft & Great Yarmouth. It`s an odd one to describe a sort of bossa nova feel mixed with a sub Happy Mondays like dance vibe.

`chaos in the patterns` sounds like a punk rock number on vinyl that should be played at 45 rpm and has accidently been set at 33 1/3 rpm, oddly alluring. The band also reference Netflix and US TV series Friends in the track `Something Wrong with the Phalange` which is i`m led to believe about digitally overdosing on online boxsets. I couldn`t work out the title as a phalange is either a group of people or things of a similar type forming a compact body or a bone of the finger or toe. Nevertheless, there was much to be enjoyed and it had me in mind of the wit, wisdom and charm associated with Ray Davies of the Kinks. The keyboard tinges, harmonious La La La`s and the dead pan delivery were a joy to behold.

`the law of attraction` returns to a more dreamy otherworldly sensibility and if i`m honest it had me nicely drifting off allowing all my earthly concerns to allude me for three and a half minutes. We close out on the track that BBC DJ John Peel loved `The Ballad Of The Peshwari Naan` and it`s a fairly fast paced offering with a slight Bhangra Bollywood beat going on.

Mark Christopher Lee and his cohorts continue to make some of the finest eclectic and genre bending music around with lyrics that sometimes are a little difficult to define but that to me is the beauty of this bands style. I`m led to believe we have study packs to research the life and works of John Cooper Clarke as preparation for the GCSE English Literature exams. So maybe we should start a campaign for something similar for The Pocket Gods as there`s plenty of material to utilise. In the meantime, I look forward to the not so difficult 74th album.