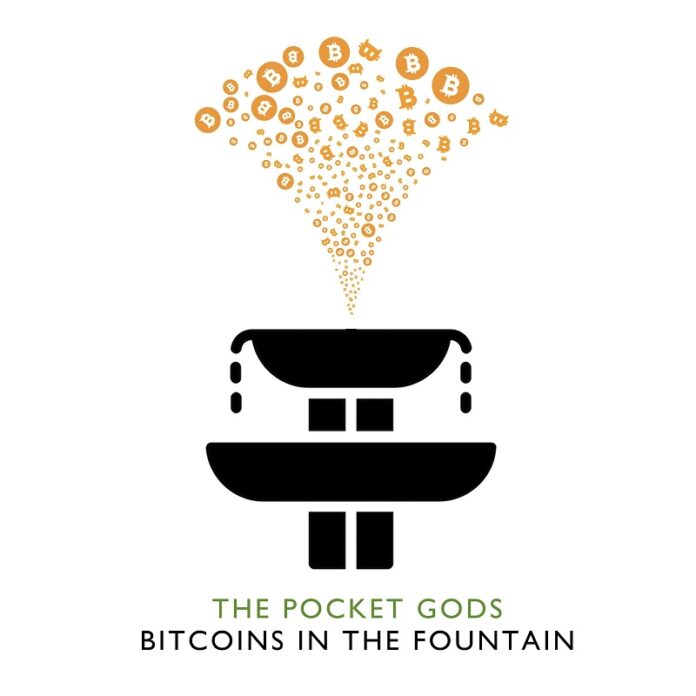 The Pocket Gods release their new “indie future pop” album `Bitcoins In The Fountain` a concept pop album on life in 2022 and the technology driven future that awaits us. The band were formed in 1998 and have been championed by the likes of Tom Robinson and Steve Lamacq as well as being briefly discovered by DJ John Peel. `Bitcoins In The Fountain is their 77th album.

The album opens with `Living In The Meta Verse` which is a quite poppy mesmeric  futuristic sounding offering. A search on the web enlightened me as to what the metaverse is – broadly speaking, the technologies companies refer to when they talk about “the metaverse” can include virtual reality—characterized by persistent virtual worlds that continue to exist even when you’re not playing—as well as augmented reality that combines aspects of the digital and physical worlds. The number had a real synthy key earworm tone throughout and a really catchy chorus line of “living in the metaverse, I guess it could get worse, living in the metaverse, guess it will get worse”. I thought `She Says Moon` was delightfully Americana tinged with a ringing xylophone like tone threaded throughout.

`The System Is Down But I Am Not` is a quite captivating uplifting musing which I read has been a College Radio hit in the US. I had to say even by The Pocket Gods standards `1st Class To Cricklewood` is a strange one. A tribute possibly to the London Borough that is Part Primal Scream and part indie hip-hop.

`Life In One Day` is a quite heartening slice of indie dance like pop although the lyrics do reflect some issues to do with feeling out of sorts with life. We have a faster paced pop tinged rumination with `Midlife` that`s generally the time between the ages of 40 and 60, where you do tend to reflect on mortality.

`Not Feeling Very Good About Myself` is a lethargically shared  slow to mid-paced contemplation and something that i`m sure we`ve all experienced at times. The music did seem to imply that feeling of not quite being right with the world. We have in `The Rise Of The Virtue Signallers` a song that seems to be ballad like in the style of songs like `Stand By Me`. It`s a cutting discourse on the growth of virtue signallers whose are those  “who attempt to show other people that they are a good person, for example by expressing opinions that will be acceptable to them, especially on social media.” The expression is often used to imply that the virtue being signalled is exaggerated or insincere.

`NFT (no fucking talent)` is about the latest trend of converting songs and albums into NFTs and making a Bitcoin mint….or not. An NFT is short for non-fungible token which essentially allows its buyer to say that they own the original copy of a digital file. The almost remotely shared vocal is offered up over a rolling drum beat and country tinged guitar chords. This release closes out with `This Is Now` a quite enchanting slice of indie pop.

As with all of The Pocket Gods albums there was much to enjoy and amuse one on  `Bitcoins In The Fountain`. A kind of line in the sand as to where we currently are and the effect of current technology.

As to where this cult lo-fi indie band will take us next, who knows?? But i`m sure it won`t be long before we find out.