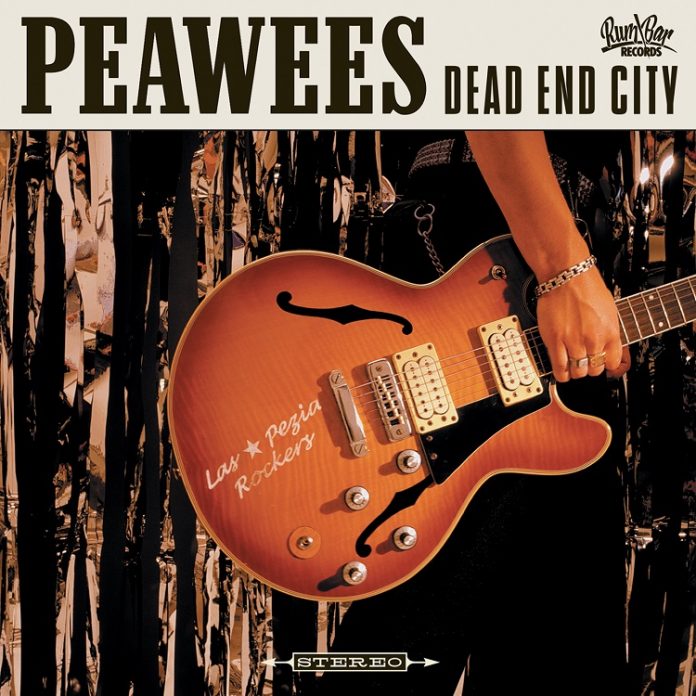 Last autumn I reviewed a record by a band from Spain called The Peawees. It’s fair to say I enjoyed it.  A lot. I got quite lyrical about the whole thing, in truth. Wittering at one point: “You don’t “like” records this good. You like shit memes on social media – which is yet another reason why Social Media is the death of civilisation – you love records like this. Especially when they’re made by bands who live records like this.”

It came as a shock at the time, to find that The Peawees had been around for 20 years. We can argue until the cows come home about why I didn’t know this, just accept my apologies for not realising.

Anyway, to that end, what we have here is their third record. It came out in 2001 and is re-released here. Now, lets just get this said right now, whatever you were listening to in 2001 it wasn’t as good as this.

The record starts with these words from singer Hervé. “Come on everybody, standing ovation for the guys who rock the most….” And brother, this ain’t no idle boast. You wanna know how hard this rocks? Well, at the end of this there’s a cover of “Proud Mary” – and if you’re gonna cover anything John Fogerty ever did, you’d best be good (like Dan Baird once wrote on “Two For Tuesday”, “Johnny never let me down…..”) this, well, this goes, “yeah but it’d be an ace punk song too” and it is.

See, with TP its all about the low-slung guitars. There’s a reason I’ve never cared all that much for indie music. They play their guitars too high up. The best? Slash, Keith Richards, play it by the ankles. These boys, you just know they do the same.

“I’m Not Right” sounds like the soundtrack to a Western movie starring Sid Vicious, while Chuck Berry plays in the background. And just in case you think this town is big enough for the both of you, “You Don’t Know Me” (which merrily chugs along like the Backyard Babies) proves it isn’t. The best thing here, if I’d heard it in 2001, then it would have been the best thing then too.

The title track has all the cool of the New York Dolls, and if the opening groove of “No Reaction” is enough to get you through the door, then make yourself at home with the 1950s rock n roll harmonies, cos they’re brilliant.

“In My Heart Tonight” offers the pay off line that its “a sad fucking Saturday night”, but then, it doesn’t feel like wallowing in self-pity either. Rather this is a ballad for people that aren’t interested in romance in the slightest.

“What Have I Done” is as fast as Zeke, but with an ear for melody, “Ready To Go” is glammed up as Suzi Quatro before a night out – with handclaps to match. “Boss Hoss” is merely two minutes of crunchy fun, “By My Side” starts with a solo, and you don’t burst to rock more than that, right?

The feeling that this just wanted to be a punk rock take on Del Shannon is rather reinforced by the take on “Runaround Sue” (and yes, I know he didn’t do the original), “Don’t Give A Fuck” is from the other end of what they do. Punk rock lip-curl? You bet. The reason for the ire? “you don’t know about rock n roll….” Sorted. The last 63 seconds of righteous fury here, “Don’t Look” proves that whatever The Peawees know, its rock n roll.

I don’t particularly care what you were listening to in 2001, nor am I especially interested in what you’ve got on 18 years later. The fact is, if you ever liked rock n roll music with attitude, melody, crunch and a basic longing to be in a leather clad biker gang in 1950s America, then get on “Dead End City” right now.

Previous article
BAND OF THE DAY: UNDERSIDE
Next article
THE OFFERING HEAD FOR HOME