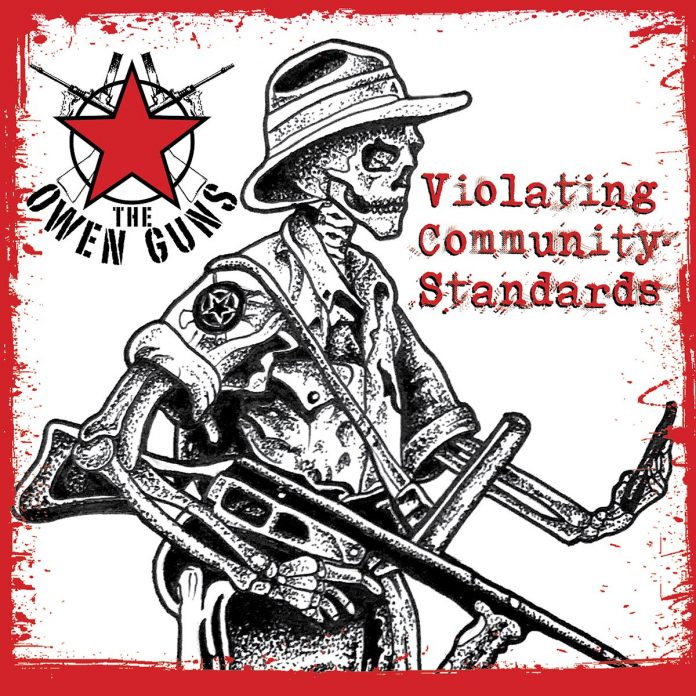 This is on the band biography of New South Wales’ The Owen Guns.

“Unlike most of the current crop of punk bands, there no fake American accents or fear of offending people here.”

You can say that again.

It’s hard to know which one is the most offensive – and consequently best – of these six tracks.

Is it “Fuck Cyclists” – which dispenses with any nuance to explain  “Smug, arrogant wankers….die” – or is it “Rent”? “My neighbour is a whore” is the charming bit here.

The answer is no.

The reason is “The Ballad Of Cheeto Hitler” exists. A song about Donald Trump, which contains this: “He’s got a tiny cock, I hope he gets shot.”

Just in case you haven’t worked it out yet, The Owen Guns are about as unreconstructed as punk rock gets. Fast, furious, filthy. You are either going to love this or hate it, and whichever you choose, TOG aren’t going to give a shit.

“It’s Too Late” is the sound of the last gang in town. Beer swilling, debauchery and whatever it’s too late for is beyond me, just know that it is, and its best not to ask.

“No!” is the destruction of someone that has asked one too many times, (“seems like a friend with stuff, is a friend indeed”) spits the vocal, and it spits and sneers pretty much all the way through.

The last one “Shitty Music for Shitty People” is glorious, but it actually hides a greater truth. See, in the noise and the sloganeering, there is a wonderful idea. And its that none of this matters: Rather its just a way to get the anger out on the one hand, while on the other, there is a real skill in the way they deliver it.

“Violating Community Standards” is the glorious sound of blokes who aren’t taking this too seriously. I hope it offends someone, because they are exactly the type of person who deserves to be offended by it.

Previous article
BAND OF THE DAY: BANDANTE
Next article
TRY IT OUT