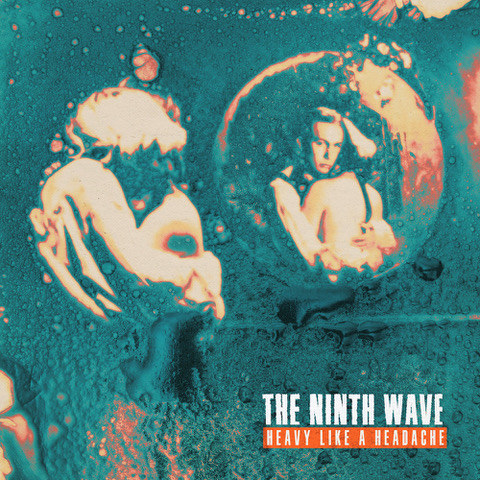 I was really surprised and saddened to hear that ‘Heavy Like A Headache’ would be the final album planned by The Ninth Wave, with the Glaswegian gothic post-punk and electronic-pop quartet announcing their hiatus after its release. It`s the follow-up to their debut ‘Infancy’  released in 2019. This album contains fifteen songs and interludes that explore feelings of grief, anxiety, anger, and loneliness.

After a track named `Intro` which is indeed a brief late night sleepy introductory soundbite from Millie Kidd we head into the wonderfully anthemic `Maybe You Didn’t Know`. It`s a song that ebbs and flows with uplifting arias accompanied by ponding drums and synth swathes. I loved Haydn Park-Patterson slight Glaswegian inflection in his vocals on this number and he and Millie Kidd have their vocal interaction off to a tee. The song is about finding comfort in the uncomfortable and being able to hide yourself behind an overbearing and engulfing undefined fear. All this and more is expressed in the evocative vocal delivery.

` Heron On The Water` has a fast paced almost EBM beat with both singers trading vocals off each other as this number evolves and progresses. It has that unerring feel of electronic bands of the eighties. `Interlude` is just that a brief soundscape.

`Hard Not To Hold You` is a faster paced upbeat offering that I found really captivating. The want and longing shared in Haydn Park-Patterson`s vocals was heartbreakingly infectious. There was a kind of growing or awakening with `These Depopulate Hours` where Millie Kidd stamped her mark all over this number. It builds almost to a crescendo before fading and allowing a piano to guide the gently shared vocals to a dreamy conclusion.

`The Morning Room` allowed Haydn to share a deep vocalised reflection against a musical background that began quietly before gathering pace and volume and felt at times like a call to arms with some almost tribal drumming and Millie`s encouraging harmonic vocals. We have in `Everything Will Be Fine` a number which is “a song about twisted optimism, self-reassurance and hope,” singer Haydn Park-Patterson explains. “The overall message of the song seems fitting for the world that we’ve found ourselves in now. Like many of our songs, it has existed in various different incarnations.” It`s stunningly robust musically and has an equally potent message shared throughout.

`These Depopulate Hours (Reprise)` is really a brief reappearance of the underlying piano segment from the track previously shared. We have a dark and a little disturbing slow burn with `What Makes You A Man`. The lyrics shared confront issues surrounding consent and rightly can be an uncomfortable listen. .

`Piece and Pound Coins` was written about a friend of Haydn Park-Patterson who passed away a number of years ago. The singer has revealed “I’ve never really felt like I wanted to/could write about him for a number of reasons, but I guess the main one was because that for a long time, I wouldn’t have known what to write. Writing about death is a world away from writing about heartache/love/friendships because there’s nobody to listen to the song and wonder “is that about me?”. It`s a pretty fast paced composition with a repetitive drum and synth beat with the vocals reverently shared atop. Millie Kidd takes the vocal lead on the off kilter title track `Heavy Like a Headache` which at times sounds almost jazzy but has a slight edginess about it. Strange but delightfully fascinating.

`Pivotal` has a fairly haunting vibe about it. Haydn`s vocals are delightfully expressive on this number that seems to gain in sound and volume as it progressed. It had an almost restrained pain or aggression at times. Millie`s gently shared vocals joins in towards the end to almost pacify or calm the situation. The synth keys had that sound that brought to mind  the sadly missed seventies new wavers Japan. There`s a reflective lyrical quality on `Some` which has Haydn initially listing life events before Millie accompanies him. The drum and synth background lay the foundation for this quite beguiling track.

The album closes out with `Song for Leaving` an appropriately titled number since the decision the band have made considering their imminent future plans. It`s an expansive nigh on larger than life mesmerising submission with a quite stunningly delicious vocal oration from Millie. There was almost a heart breaking, accepting resignation in what she shared.

`Heavy Like a Headache` is a stunning album. I loved the slight Glaswegian inflection in Haydn Park-Patterson vocals and Millie Kidd has a delightfully varied vocal range and when the two come together there`s a kind of yin and yang effect. That said the almost unsung heroes in this group are the engine room of Kyalo Searle-nbullu (keyboards/synths) and Calum Stewart (drums/synth) who allow the vocalists a platform to shimmer and radiate.

In conclusion, Surfboard riders, borrowing an old sailor’s expression, often speak of a ‘ninth wave’. Meaning a single wave larger than all the others. Colossal, unexpected, ninth waves are the stuff of legend. It is said that nothing can withstand their power. This is a fair way to sum up this band and this album. If indeed ‘Heavy Like A Headache’ does become this band`s swansong there`s no better a release to leave us with.