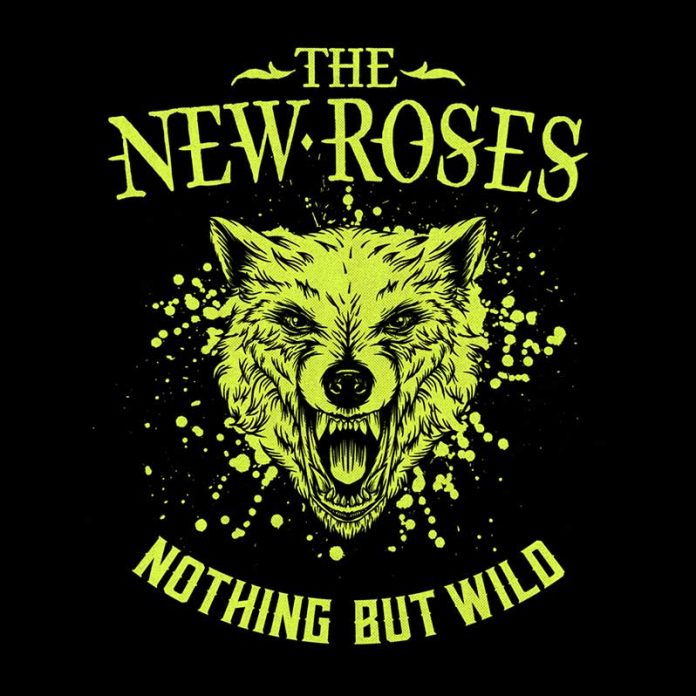 There are times, I’ll be honest, when I don’t know if I am interpreting the lyrics of these albums that I review or doing some of my own catharsis.

This isn’t one of them.

The second line of “Soundtrack Of My Life” – the lead track on the fourth album by The New Roses – is this: “create an earthquake? No thank you, we’ll feel the aftershock, that’s my kind of crazy.”

Now, to me its clear.

This is a band doesn’t want to innovate, doesn’t want to break new ground, but it Is an outfit that knows exactly what it needs to be – and that is to sound like their heroes.

You can hear evidence of the US arena rockers of the 80s all over this, and indeed if “Nothing But Wild” had been released in 1989 instead of 2019 then to be blunt, TNR are all driving around in gold cars and sticking their latest Gold Disc in the wing of their mansion where they house them.

And if that isn’t quite the landscape in this day and age, then why that doesn’t really matter is included in the second song. “Can’t Stop Rock N Roll”. Over a beat that is pure golden era Bon Jovi (and in honesty a lot of this has something of JBJ and the troops before they went too bland) Tommy Rough sings, “as long as there’s a night you can’t stop rock n roll”.

He’s half right. He could and should have added that as long as there are dreamers then songs like “Down By The River” ain’t getting old. Bryan Adams-ish, but that means its full of a chorus you won’t resist. And if this was the summer you always wanted, rather than the one you got, then maybe it was the case in Germany too, but poetic license is just fine.

The title track out Trixter’s Trixter in truth. Sleazy, but still clean enough to play to your mum, we’d have been convinced it was about some girl at school who didn’t like us in the late 80s and certainly wouldn’t remember us now, still fun though.

“Heartbreak” is an interesting diversion. Not musically, but lyrically. “there’s a monster underneath my bed, I feed it although I want it dead” jars a bit, but it adds a modern touch that many here haven’t got – and don’t want especially.

“Bullet” is a power ballad, but from the “Every Rose Has It’s Thorn” end of things, “Running Out Of Hearts” chugs along like the best pop you ever heard, and if on a 15 song record (almost as if deliberately they were flying against the modern thought of full albums being dead) there’s bound to be one or two bits of filler then “Unknown Territory” might sail a little close, but it is still just fine.

“As The Crow Flies” possesses the kind of single-mindedness that we procrastinators don’t – and it builds brilliantly  to become a real highlight. “Give And Take” is a genuine left turn, huge grooves, clever lyrics. Certainly better – if I am pushed – than the overly schmaltzy “The Only Thing” (good luck to you if you do want to “walk through the fire and back again” for the love of your life, mind you). “Meet Me Half Way” (basically “Someday I’ll Be Saturday Night” rewritten) is way better and “Glory Road” is the perfect summation of what can be achieved by modern classic rock. Equal parts Black Stone Cherry and Bruce Springsteen, it is genuinely superb.

An acoustic version of “….River” would have been an ace b-side back in the day, and I’ll bet that longing for the day of the single not the “You Tube Visualizer” is why it’s here, and likewise “Fight You Leaving Me” from their 2017 record is given the same treatment, to great effect, actually.

When they stuck that album – “One More For The Road” – out a couple of years ago, I hoped they’d make the breakthrough over here they so richly deserve. The sentiment I have today is basically the same.

Kiss have flogged their dead horse for the last time (yeah, right) Def Leppard and Bon Jovi haven’t released anything good in donkeys’ years, and someone has to replace them. That someone should be The New Roses, and they’ve been ready their whole lives.