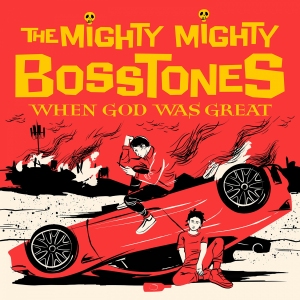 In the seven years I’ve done this site, here’s what I’ve learned: Every band is someone’s favourite, and you might as well stick to the truth.

In that spirit, here’s the skinny. I saw Mighty Mighty BosstoneS (Christ knows what this capital “S “is about, but they were insistent there must be one) 20 odd years ago. I had a brief Ska Punk faze because I loved Rocket From The Crypt. Like everyone else I bought the “Impression That I Get” single.

What I am not going to do is bullshit you that I know TMMBS back catalogue, beyond that 97 album. What I am also going to do is tell you this: “When God Was Great” is stunning.

A vast, sprawling thing – an hour long and 15 songs – with as many different styles as there are members. “Decide” makes good on the thought I heard on a podcast the other week that Ska could cheer anyone up. Fittingly, for a record that according to frontman Dickie Barrett “just about everyone that’s ever been a Bosstone played on”, there’s a real feeling of family on this. That said, this is The BosstoneS, and they just exist to be catchy. “M O V E” is the type of thing that can drive you mad, and “I Don’t Believe In Anything” is as 90s as you like.

In truth (there’s that word again) you can dip in to any of these and find something that’s from the top draw, albeit with as many different flavours as you get in a Pick N Mix. Like “Certain Things” has a country thing happening, “Bruised” is like a calypso dance, a thought “Lonely Boy” builds on, by adding even more reggae on the top.

There’s a political bent to the words of Barrett too, just like always, and if “The Killing Of Georgie (Part III) is so much fun it could be Southside Johnny and The Asbury Jukes, then it still makes its point clear.

“….Great”  is an album of genuine warmth. Nowhere better than “You Had To Be There” and its celebration, and the title track itself sounds way more like Bruce Springsteen than you might imagine The BosstoneS would be.

“What It Takes” has the air of a 70s TV theme, and if you never thought a tender ballad would appear here, then “Long As I Can See The Light” shows you know nothing and the band are cooler than you are, “The Truth Hurts” shows they have a grasp of pop music too.

The piano is fabulous throughout. John Goetchius has unleashed his inner Elton John, but goodness me, he’s on top form during “It Went Well” and “I Don’t Want To Be You” is underpinned by him too.

In many ways, though, the defining statement on “…..Great” is the last one “The Final Parade”. A string of special guests (honestly there’s more people on this than were in Band Aid) join the band for a party. A celebration of life, of music, of friendship. And more than anything, that sums up the genuine fun of “When God Was Great.”

Try listening to this album and not smiling, I dare you. You won’t manage it.