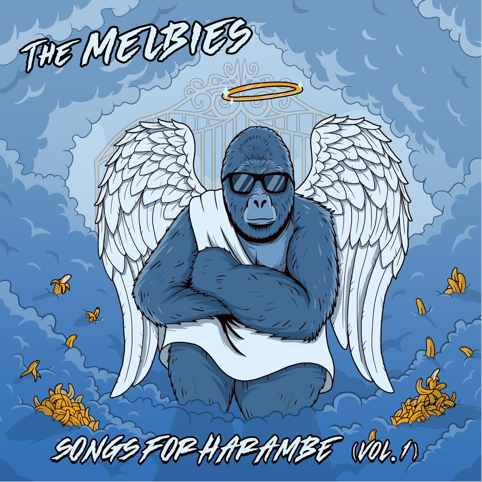 Quite regularly, I see a girl I used to go to school with when I am driving to work. I can’t remember her name (I left 30 years ago and never gave a shit about any of them even when I was there) but my one thought about her every time I see her, is “Christ Luv, how much did you pay for that Botox”.

Now I have a musical accompaniment for it: “plastic surgery gone wrong, you look like King Kong” goes a line on “Georgia” one of the 13 tracks on “Songs For Harambe Vol 1”. So, urmmm, welcome to the world of The Melbies I guess.

See, The Melbies are a punk band. They are a damn good one too. Hell, the opening song even sounds a bit like Ferocious Dog. It’s just that Sam, Mac and Nesbo, don’t write your normal punk songs.

“Sausagefest” is not what it claims. It’s not a song about sausages. Here’s what it is: catchy as Covid and a lot more fun, although not as much fun as stretching your sack, I suppose (that’s one of the lines).

If you haven’t worked out that The Melbies aren’t The Sex Pistols yet, then “I’m Sorry Indy” (which takes Indiana Jones’ recent outing to task) will finally confirm it for you, hopefully, and if “Reboot Me” is actually a pretty conventional “live for the weekend” thing, then its from the more Dirt Box Disco end of filthy punk, than The Clash.

“Brother” races along about a million miles an hour, “There’s A Reason” is that rarest thing – a song that is pretty funny. As earnest as grunge, but its about the drummer getting pissed (and whoever is doing the Justin Hawkins impression, good lord!).

“Beano” is genuinely brilliant. Ska punk which imagines a world where Dennis The Menace is in prison, Gnasher is dead and “the Beano is full of shit”. It’s entirely what The Melbies should be doing, and, it could be argued what Sack Trick and Anti Product were doing twenty years ago, to be fair.

There’s some anger in “Everything You Said”, while “Rosie And Jim” is the type of left field brilliance that you (if you’ve got this far on the record) have come to love. The 90s vibe of “King Of My Castle” shows their gift for melody and makes a rather serious point about what you learn as you get older, and “The Ballad Of Colin Dent” merely says “we’re sorry about Denty” as the hero of the song gets pissed (I googled the name and he may or may not be a Director of a Freemason lodge, so he scares me) over a sort of Eureka Machines vibe.

The press release for this reckons The Melbies are “the kings of irreverence”. And that’s ok. But it smacks of Steel Panther. Who are gash, and this isn’t. It is actually the official position of this website (well, ok, me…..) that Chas and Dave are the finest wordsmiths we had on these shores, so lets call The Melbies the Punk Rock equivalent.

“Songs For Harambe Vol 1” is either brilliant, or its rubbish. There’ll be no one who listens and thinks, “yeah that was ….ok”. I’d imagine that The Melbies won’t care either way. So you give it 0/10 if you like, its my website so I’ll give it loads, and hope I see her with the terrible lips tomorrow when I drive to work, cos this one is for you, whatever your name is.