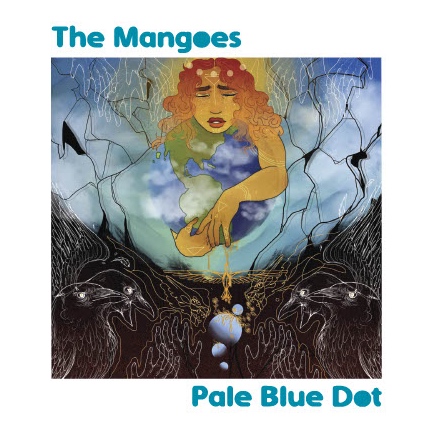 The Mangoes are a pop-rock duo formed by Tim Morse and Bret Bingham in 2014 and conceived as a song writing collective. Bret Bingham is a singer, songwriter, and guitarist. His music has appeared on multiple television and cable shows. Tim Morse is a singer, songwriter, and multi-instrumentalist. He was a member of the Jerry Jennings Band and Parallels (Yes tribute).

They have a new extended play ` Pale Blue Dot` released this month. When asked about it Bret shared “In general, the concept of the cd was inspired by the existential musings of Carl Sagan and his observation that ‘The Earth is a very small stage in a vast cosmic arena.’ The extension of this is to look outward, beyond our myopic viewpoints, and realise that each of us is a very small part of something much larger.” Tim continues, “I see the album as a song cycle with ‘Pale Blue Dot’ as the starting and ending point, it is the fulcrum of this music. All of the other songs are vignettes about people and events that take place on the ‘Pale Blue Dot.’”

This extended play opens with the brief instrumental `Suspended In A Sunbeam` and it feels like an awaking of sorts, a sort of shimmering ray of sunlight. The opening to `Pale Blue Dot` was very reminiscent of the opening intro to Led Zeppelin`s `All Of My Love` but that`s were any similarity ends. This number is a delicate reflective and introspective musing on this fragile planet we exist on. There was a delightful almost orchestrated passage midway through and a spoken word snippet two thirds of the way through this mesmerising composition.

`Mystery` has a quite enthralling texture about it and has that wonderfully `out of this world` detached feeling that is more associated with bands like Pink Floyd. Again, there is a spoken word segment and some nigh on middle eastern tinges at the latter part of this beguiling journey. There was a dreamier feel to `When the Sky Fell Down` which had some charming harmonies. It had a sort of languid jazzy Sunday afternoon touch to it, maybe that was due to the inflections of a brass section.

`Finding The Light` begins with a piano and vocals before cello and acoustic guitar chords join in on this short but enjoyably intense submission. There was a more bluesy / jazzy vibe to `Hypnotized` with brass, piano, vocal harmonies, and a fleeting guitar solo towards the end. The number has a few seconds reappearance with a kind of Wurlitzer come music box type sound effect.

`Pale Blue Dot reprised` is an interesting piece which opens with birdsong and flowing water before a piano leads the vocal through a quite thoughtful observance on our existence. There are some spoken word statements such as “death is not the end and love goes on” almost blended or intertwining with the musical backdrop. Once more the number concludes then seems to reawaken with some quite eerie gospel like chants. This extended play closes out with a cover of the Beatle`s nostalgic ‘Free As A Bird’ and it’s a pretty close version which they take and put their own slight twist on.

There was a lot to enjoy on `Pale Blue Dot`. This EP contains some well thought out and well-crafted songs that have some quite deep and contemplative lyrical content that will maybe give you more than a moments reflection on the subject matter.

The Mangoes to me are a sort of art rock, prog, pop outfit, whom I look forward to hearing more from.