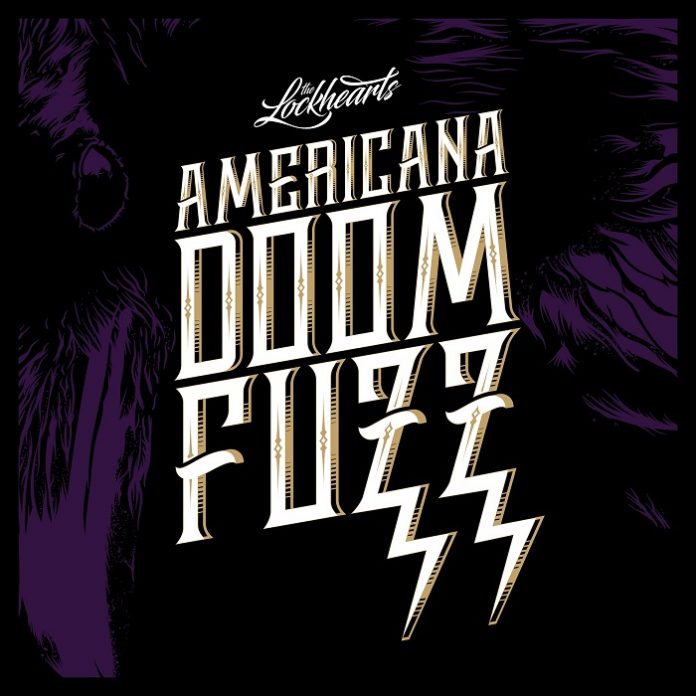 To be fair to the lads in The Lockhearts, you can’t accuse them of not being up front with “Americana Doom Fuzz”. No, rather like the death metal band – simple rule, the heavier the band, the less you can read of their logo – called Rotting Satan (we’re making this one up – I think?) or the programme on Television X tonight called The Great British Bonk Off (this one is true, I’ve just checked in the name of “research”) you certainly get a clue as to the contents from the title of the album.

But, actually when it comes to this Aussie quartet, a clue is all it is.

Rather more pertinent is this gem from the press pack that came with the CD: “The Lockhearts formed in Sydney’s inner west over a shared love of Aerosmith, The Rolling Stones, Tom Petty and hot sauce”.

Pretty much, that alone would be enough to prick some interest, but it only takes about 25 seconds of “Leatherface”, the album opener and longest track, to convince that you’re dealing with a special debut record. There is a classic rumble in its riff, a sense of bluesy swing – and the overriding feeling that these boys would have been more than happy to have been born in the 70s.

Even more superbly, The Lockhearts couldn’t give a toss about rules and expectations , because the summery “The Ocean”, drenched in harmonica and with more than a blue collar echo of MV faves You Am I, could be a different band.

And the fact is that if you try and pin down The Lockhearts, they’ll make you look like a mug, because they’ve got 11 songs here and 1001 ideas. That’s why “Call For Help” has a bluesy soul thing going on, while “Little Eden” has a touch of The Beatles in its chorus – or at the very least it could have been on Oasis’ third record with ease.

The point is, however steeped in rock n roll this is, it is never retro. It is far too savvy for that, and for a band on their first go round, there is a real maturity here too. “London Bound” seems to have been written from the heart, and as well as making good on the Americana part of their name is a work of real skill.

“If I Was Your Man” – celebrating a one-night stand – is the type of thing to make Jesse Malin jealous, and the sheer glee in “Goddamn Pretty” is exemplified by its backing vocals, which distil rock n roll into its purest form with no shame at all.

If there is barely a week point anywhere here, then “Ride Home” is the absolute pinnacle. Lead guitar of the low-slung variety, a chorus that is stupidly catchy and cowbell gives the total package, and if they hadn’t really been Fuzzy before then the bassline to “Polaroids” is. Plus the song is the sort of arena rock that Powderfinger were ace at.

Then there’s the doom – but its doom up to a point. “Spectre At The Feast” is slower, has a Sabbathy opening riff, but the organ use is more akin to The Spiritual Beggars, rather than any metal brew.

All of which leaves the final one. The final twist, the one last turn. There’s a punkish side to “Xanax” but moreover it is just proof that any song with handclaps at it’s heart is fun no matter what the subject.

Of course, there’s that thing about having your whole life to make your first album, but crikey “Americana Doom Fuzz” is a special one that needs talking about. Put it this way, on the aforementioned “Ride Home” there’s a line that says: “when your friends are all in touring bands and you’re living back at home.” Not for much longer we’d humbly suggest. The private jet awaits.

Previous article
Dimmu Making It
Next article
Here They Am Again