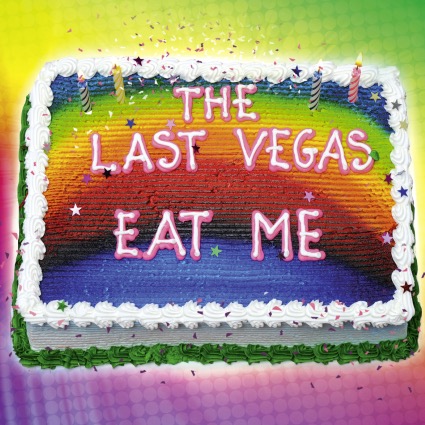 Musical growth and Reality TV mixed together ends with something special

It seems a touch incongruous to say this about an album called “Eat Me” but it is the most mature thing The Last Vegas have done. When they emerged in 2010 with a magnificent slice of sleazy rock called “Whatever Gets You Off” – arguably the best “hair metal” record of the last 10 years – it did seem, as brilliant as that record was, that they were going to be cast in that role for the rest of their careers.

Fast forward six years, and although the building blocks to good time rock n roll are still there (and so they should be!), it’s a very different outfit. In truth, the roots of this had started with the the psychedelic tinged “Sweet Salvation” back in 2013, but are fully realised here.

The reasons for this probably lie in a couple of things. First, this time the band decided to produce themselves do had no one telling them what they should sound like. Then, perhaps more crucially, drummer Nathan Arling was in Sweden for two months filming a reality tv show and became immersed in the music of the country – the result is a record that knows the debt it owes to greats like the Backyard Babies and The Hellacopters.

The final piece of the jigsaw was completed when singer Chad Cherry relocated to LA. It meant strict deadlines to get the album done before he moved, and if that is what accounts for the palpable energy here, then he should move more often.

“Bloodthirsty” which kicks us off here, does so in a pretty conventional hard rock way, right down to the talk box riff. As with all the TLV’s best moments, it has a wonderful hook and a chorus you can hum cheerfully, as if it’s just instinctive to them. “Here We Go Again” imbibes from those Scandinavian rockers more than happily, but then comes the first of many left turns.

“Universal You” is a laid back, summery and shimmering 1960s ballad, and right after it comes what can only be described as a funky disco style stomper, “Hot Fudge” should – and let’s be blunt here – be awful. It isn’t. It’s great.

The new ideas – and you sense that this was record where nothing was rejected for being too outlandish – keep coming. This anything goes approach is never better shown than on “Along For The Ride”. It starts by with some Indian style mysticism, borrows from “Gypsies, Tramps And Thieves” and still contains the first line: “I roll like a motherfucker when I’m at home….” If this is the brave new world, then more please.

There’s very little about 11 songs that doesn’t work. “Voodoo Woman” and it’s marvellous organ flourishes is a highlight, and as if to prove they haven’t forgotten their roots then “Hard To Get Over You” is the type of thing that Cinderella used to do at their best, and “To Be Treated” is off looking for trouble before you can say: “theres some pretty girls over there…..”

Things end with perhaps the most difficult one to get your head round. Even for this record then the Marilyn Manson electro stylings “From Hell” is a stark reminder that things ain’t quite what they used to be.

This is The Last Vegas in 2016, they haven’t forgotten how to have nothin’ but a good time, but they’ve grown up superbly. Perhaps the best way to put it is this: they still want to get you off, but rather a quickie, these days they will buy you dinner and some nice lingerie first. “Eat Me” though, has some sweet stuff to swallow.