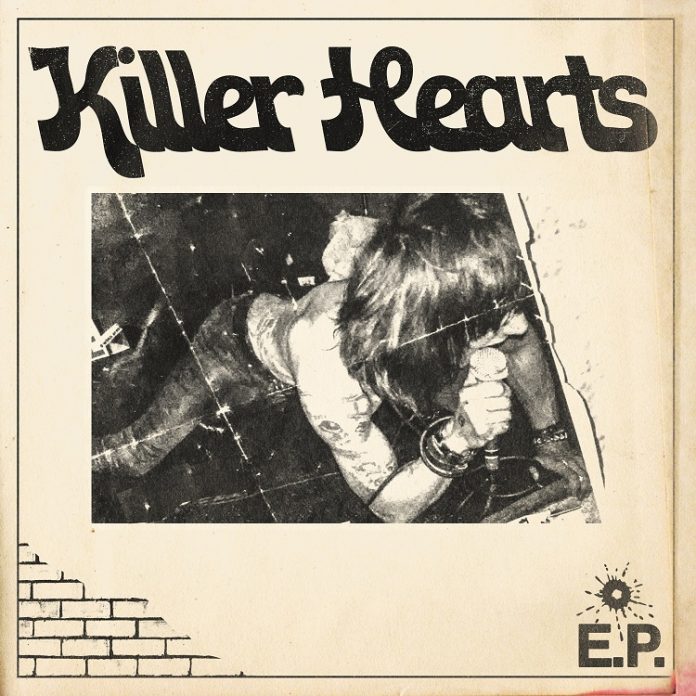 Sometimes, things just are what they appear to be.

This EP is one of those times.

“Killer Hearts” is the debut release of a Texas band, who if they moved in next door, would give you two choices. Join the party, bring the booze. Or leave town.

How rock n roll are Killer Hearts? Well, consider this. According to their bio they opened for Biters. I am willing to bet that Biters – who are the most genuinely dangerous rock n roll band I’ve seen live in a long time – would have been scared that night.

“Do Your Thang” does just that. Equal parts Ramones, Chuck Berry, Motorhead and Hanoi Rocks (I mean, come on, what else is that Sax work) and it’ll have you leaping about like a crazy person.

Look at the names of the band as listed on their Facebook page:

You’d best believe that the song “Midnight Lucifer” is exactly as sleazy as you’d want from a six piece with those monikers. Actually, sleazy indicates there is at least an attempt at seduction. Not here. This doesn’t even bother getting undressed before it blows its load.

“Annihilation” sounds like its been recorded live in a swinger’s club. In the dungeon downstairs, while they all sniffed glue and watched. Absolutely unashamed, unrepentant – and as unrefined as you like.  Oh, and catchy as hell.

“Killed By Volume” is the spirit of rock n roll, met with the attitude of punk, and honestly, for all the fact it is scuzzy, fuzzy and fast and furious, Killer Hearts know exactly what they wanted to achieve here – and they did it brilliantly.

The whole EP is the antithesis of a band that has “career goals”. These boys don’t know what a spreadsheet is. They do know how to make a debut record. They were born to do that.