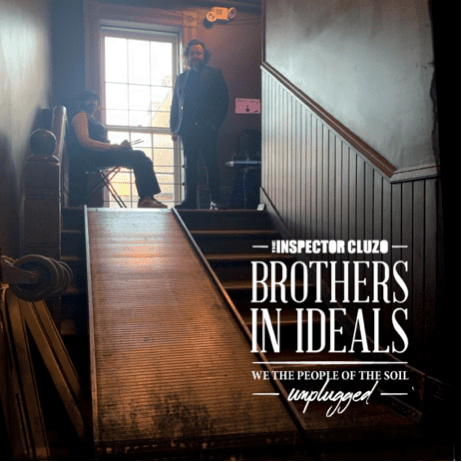 Way back in the last century – and to some of us, 1995 seems like yesterday – Bruce Dickinson (who was then a solo artist) released “Alive In Studio A”, a collection of session recordings with his new band made up of stuff from his first solo albums. There was nothing new on it. There was a second disc, which if I recall was a live gig of basically the same songs.

I can still remember the review of it in Kerrang. “All but the truly devoted will run to the hills”, it said. Clever puns aside, the memory of that record (I bought it by the way, for I am truly devoted) was in my mind when “Brothers In Ideals” turned up.

“….Ideals”, you see, is an “acoustic reimagining” of The Inspector Cluzo album “We, The People Of The Soil”. That collection is odd enough, given that it is a sort of concept record about the onset of globalisation, climate change and all kinds of things.

But an acoustic reworking? Ok, I can’t be the only one who thought “why?”

Having listened to it, though, the answer to that question became rather more: “why not?”

Back in 2018, just before Christmas, I saw the band open for Clutch. In my review of the gig I remarked that the duo had “a show that is part gig and part performance art.”

And if that holds part of the key to this, then the main point is this. TIC are a band that – a little like The Picturebooks who were on the bill that night too – does their own thing. “We were not planning to release it …but it is our own label and we do what we want. We never have a career plan..we just follow our artistic desire,” says singer Laurent.

The six words that stand out there are these. “we just follow our artistic desire”.

They wanted to make this. So they did.

Moreover, its rather cool too. The only song missing from the original here is “Pressure On The Mada Lands”, but to be fair that had Tyler Bryant on it, so acoustic it may be hard to recreate, and “Brothers In Ideals” has a different tracklist, but the spirit of “….Soil” is there, and there is a whole different flavour, an earthy quality, if you will, to it now.

“A Man Outstanding In His Field” turns into a sort of busker thing, the strings on “A Cultural Misunderstanding” are a nice touch, but highlights are many.

“Globalisation Blues” is probably the pick, turned as it is into something that is part Kelly Joe Phelps style front porch blues and part “Sticky Fingers” era Stones having a jam round Keith’s gaff, although the fact that “The Best” is now turned into a Led Zep type thing is close behind.

“Ideologies” is darker, although its nihilism is heightened here, with the harmonies particularly eerie, “We The People Of The Soil” sounds even more soul-infused than it did previously, and the pianos are superb, and is an example of the idea that many of these aren’t as sparse as you might have thought. “No Deal At The Crossroads” is another. Veering between poetry and Spaghetti Western, it is an idea that “The Girl And The Whistling Train” takes on and runs with still further.

“The Sand Preacher” seems to be the impending doom made musical, and “Brothers In Ideals” – just like on the original album – finishes things, rounding up the story, concluding that “all I want is right here.”

That feeling of contentment is easy to find here, and The Inspector Cluzo have given themselves the freedom, so why shouldn’t they use it?

Can you enjoy “Brothers In Ideals” without hearing the “other” version? Yes, absolutely, and that is really all you need to know. I was going to put “all the vindication they need” there, but then, Inspector Cluzo aren’t bothered about such things. They are just happy doing what they do.

Previous article
BAND OF THE DAY: PYOGENESIS
Next article
HOWLING OUT AT MIDNIGHT