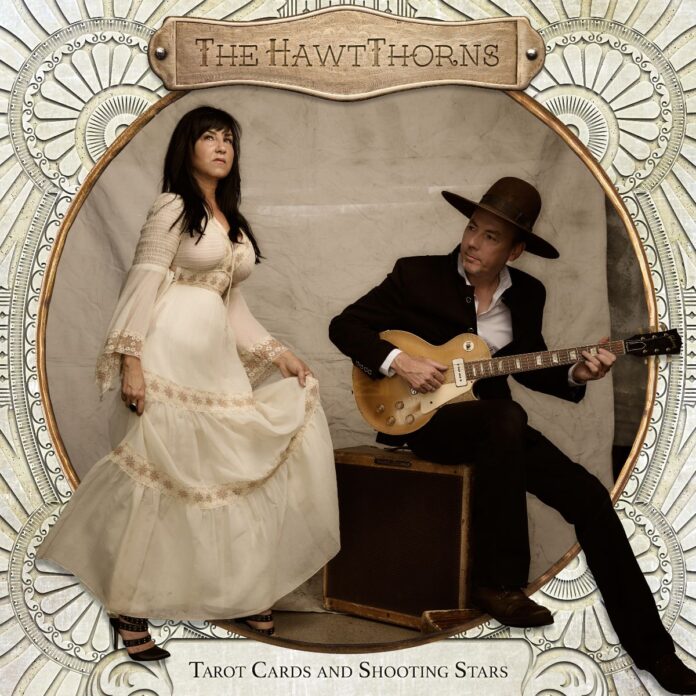 I am not married. I am not going to lie and pretend I’ve had the chance to be either, but the honest truth is I don’t think I could do compromise at any point and it always seems to be a constant negotiation.

So, I might have it totally wrong here, but I don’t really understand how couples manage to work together. It must be even worse when you’re in a band surely?

Well, so you’d think. No one told K.P. and Johnny Hawthorn. The duo are The HawtThorns, and that is particularly important on “Tarot Cards And Shooting Stars”. There’s an easy chemistry, of course, but it runs deeper than that.

Never a conventional “Americana” band – Johnny had played with all kinds of bands including the MV faves Everclear before meeting KP – their “Morning Sun” debut marked them out as something a little different. This one, well, it continues the theme but dials that up even more.

I was going to write “turns it up to 11” there, but the truth is that it doesn’t. Records don’t come much more sun-dappled and more relaxed than this.

In 2020, the Hawthorns – and thus The HawtThorns, too, if you see what I mean – relocated from the US West Coast to Nashville. And that is all over “…..Stars”. Americana, yes, but only if it was made by Joni Mitchell and Graham Nash in about 1969 while looking out over Laurel Canyon.

“All The Right Reasons” is, you guess, autobiographical. But as it pulses along, it sort of seeps into your consciousness, and KP’s sweet voice carries it on a warm breeze it seems.

Johnny’s guitar is deceptive, and it underpins “On The Way”. One of the highlights of the record, it is indictive of the work here with its clever lyrics and fabulous musicianship. “Lets Get Together” feels like an anthem. “Hard times won’t last forever” sings KP and its perhaps a response to the pandemic, or maybe a reminder for what’s to come.

There’s a deeply soulful feel about many of these. “Lotta Love” in particular comes from that place, but its when they mix the two styles , the country and the west coast, that this scores big. “Baby It’s A Gift” for example has some genuinely lovely harmonies, and if “Keep It Alive” is a little more strident, then its made for the radio all the same.

Often I like to come up with one key word to wrap around the review (then waffle for 600 more, go figure!) and the one for this collection was “empathy”. It seems to concern itself with the human condition. “One Human At A Time” is perhaps the peak of this (if only because it rhymes “paradigm” with “time.”) and its arguably the best thing here. We are all, after all, the same.

“This One Is Ours”, a road song that echoes Springsteen in the “Tunnel Of Love” era, is a little twist and turn, but they are adept at the acoustic songs just as much as the strings and all sorts. “When Georgia Cries” is as stripped down as this gets, and it’s a vehicle for the lovely voice of KP. The last one, “One That Got Away” is a departure, given that it’s a duet, almost, and the dual harmonies are really quite special.

Speaking about the album – which has been out for six weeks or so at the time of writing  – KP reckons: “There’s been so much darkness lately. I understand why artists feel compelled to write about that, but I wanted our record to feel like a light at the end of the tunnel. It’s a happy-ending story to a tough year.”

This is that and more. To paraphrase what British broadcaster Danny Baker always says about his podcast, “Tarot Cards and Shooting Stars” is a good deed in a wicked world.