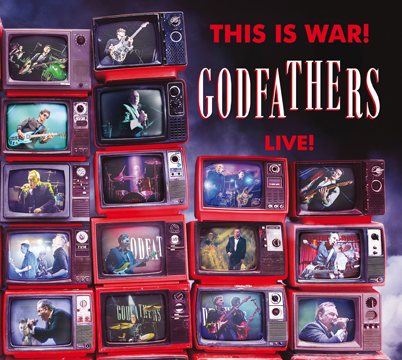 When you reach a certain age in life, you`ve seen thousands of bands that come and go but there are always a few that will remain with you no matter what. The Godfathers are to me one of those bands. I have seen them numerous times over the years and if there is a band that is made for recording a live album, it is them. They are currently busy writing a new album but in the mean time we have a retrospective live album that covers all bases up to and including cuts from their most recent, critically acclaimed release “A Big Bad Beautiful Noise” to keep us sated.

The tracks were culled from shows performed in Bremen, Germany and Malmo, Sweden.
The blistering and political `This Is War` kicks us off before a personal favourite of mine `Cause I Said So` with it`s almost arrogant lyrics, still fresh and pertinent thirty years since it`s release.

A cut from the guys last release, indeed the title track `Big Bad Beautiful Noise` is blasted out and proves that this scorching outfit are still writing and delivering thumping slices of high-octane rock and roll come rhythm and blues. The wonderfully reverberating `Till My Heart Stops Beating`, could be construed as a love song but I think it has more to do with Mr Coyne`s desire to remain on the road with this glorious band. It would be ungracious not to mention the current line up with has been together for a few years now with Peter Coyne (vocals) Steve Crittall (guitar) Alex McBain (guitar) Tim James (drums) and Darren Birch (bass).

We get a slight change in pace with the delightfully constructed song `One Good Reason` a song that The Rolling Stones would have been proud to have written and performed. We even get some catchy “whooh hooh hooh” melodies throughout. Brilliant. As Pete confirms the band offer a bit of Rockabilly magic with the cracking `Walking Talking Johnny Cash Blues` It`s back to the blues with `How Low Is Low` before the intricately structured burn of `Unreal World` followed by the imposing rock out of `Defibrillator` The almost hypnotic `When Am I Coming Down` weaves it`s spell with almost psychedelic interludes and vocals mesmerisingly sung atop before the sixties tinged `She Gives Me Love` plays out. Another psychedelic shaded opus with probably the longest title in the world follows with `Just Because You`re Paranoid Doesn`t Mean To Say They`re Not Going To Get You` is aired before the scorching demanding and superbly musically menacing `I Want Everything` The album is rounded out with the sweltering `This Damn Nation` before the anthemic `Birth School Work Death` with its genius lyrics crunches us into submission.

This is a stunning live album and highlights what this underappreciated outfit are all about.
It really manages to capture the spirit of their live shows with what at times is unnerving, relentless and brutal. This band smash it out the park in a live setting as I and many others have witnessed, and this release does go a long way to encompass the essence of their intensely shattering performances.