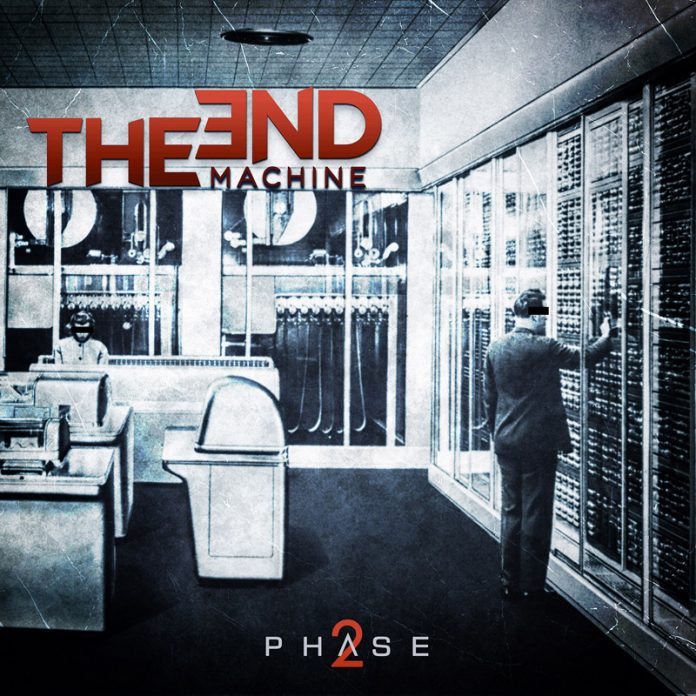 Never sure how it works. Is it plagiarism if its your own stuff?

See, back in 2019, I reviewed End Machine’s debut on these pages. I concluded the thing thus: “you’d best believe it doesn’t sound like the end of anything. Merely the start of something pretty great.”

Fast forward a couple of years (this has actually been out since April) and “Phase2” is with us, and essentially it’s the same thing. That is to say, everything that was great about that one is great about this one too (or two if you take the point).

For the uninitiated, The End Machine is George Lynch – guitar, Jeff Pilson – bass, and Steve Brown  – Drums. Look, its basically Dokken with the addition of Robert Mason of Warrant singing (and even Brown is taking from his brother Mick – ex Dokken who has retired since the debut). And you can actually say that with confidence this time, because while (largely) The End Machine tried in the main to steer away from that, “Phase2” moves back to the home turf.

That’s just fine. When I was buying Dokken albums as a kid I did so because it sounded grown up and mature. It still does.

Lynch , for my money, has always been an incredibly underrated guitarist. His “Eruption” moment as it were, at the start of this “The Rising” is proof, but the way it bursts out of the blocks with “Blood And Money” Is a thing of beauty.

If you are – lets be honest about this – a “certain age” (you know, where you start thinking modern music is a racket) then frankly you’ll love this. “We Walk Alone” is the type of thing that modern day Coverdale tries to do with Whitesnake, its just here they really do it. “Dark Divide” has a bit of swagger, a bit of sass, but let me tell you what they’ve all got: hooks. Big, massive, huge. Whatever adjective you want to add, they are here.

There are frequent moments that touch brilliance on this. “Crack The Sky” is perhaps the best of them, but you’ll not find anything that isn’t shot through with a real class. “Prison Or Paradise” or “Plastic Heroes” which adds some Beatles type harmony for grins, or the blues inflections of “Scars” don’t so much stand out as stand testimony to the skill of everyone here.

It’s rare, frankly, that you find a record this consistent. In football terms, the boys have all turned up for the full shift, and delivered. There’s no hint of a dip anywhere in “Shine Your Light” or “Devil’s Playground”. Indeed, the latter is one of the most interesting, veering as it does, from the downright primal to the brooding darkness.

“Born Of Fire” has the type of title that suggests either death metal clowns in black and white make up or power metal bands in spandex. But this is The End Machine, so its actually classy hard rock, nothing more and nothing less.

The funny thing is if you try and describe this, there aren’t that many ready comparisons. Bands like Rockhead back in the 90s, stuff like that, but that might be too niche. You can’t call it AOR though, because that always smacked of big balladry and bombast. That’s not here. “Destiny” for example, is proudly funky, and proud of its skill.

Perhaps the best thing to say is this is one of those “projects” that is “created, overseen and directed by Serafino Perugino President and A&R director of Frontiers Records.” He does this a lot and why not? We’d all love to put the bands we love back together and by and large that’s what this is.

It’s more, though, because The End Machine have a proper chemistry, and this is a record that is  a new phase that is even better than the debut, so its more a band than an experiment at this point.