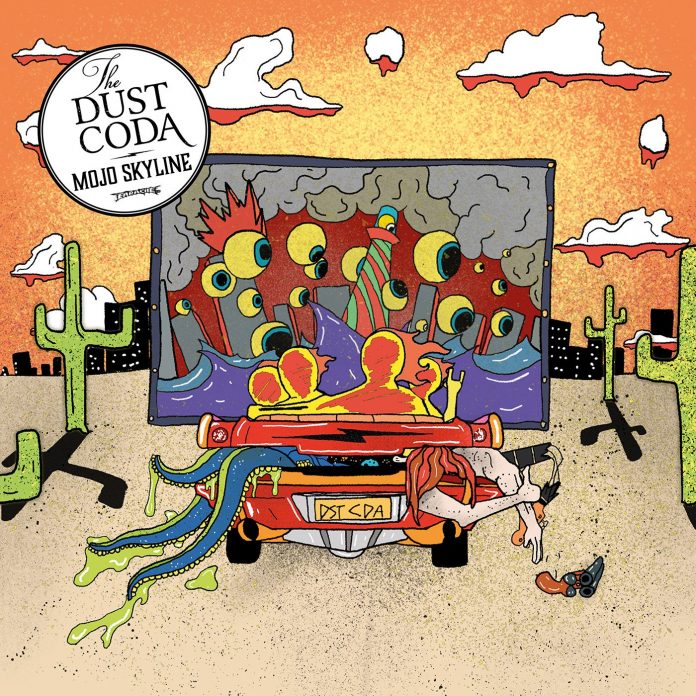 There are people who think music gets them from point A to point B in their cars. And that’s cool, each to their own. But they tend to be the same people who when you ask them what their favourite music is they say “oh I dunno, I like a bit of everything, me”. And they are also the same people generally, who say things like “why don’t you review bands people have heard of?” when they see you raving about bands like The Dust Coda.

This neglects a hugely important point: everyone should have heard of them by now.

I wrote a review of their debut record back in 2017 and concluded it thus: “as debut’s go this is very special indeed. Songs big enough to fill arenas played by a band who have the burning belief that they belong right there on those stages. Don’t bother getting in their way.”

“Mojo Skyline”, with the greatest respect to those songs is on another level.

That much is clear from the moment John Drake roars the opening line: “Yeah I got a demon, a demon in my heart” and the riff thunders in. This means business. It’s making up for lost time.

Bluntly, TDC are the band that Rival Sons should have been, before Rival Sons decided to get all mystical and tedious (and yes, I know they are popular, but so is Mrs. Brown’s Boys, it doesn’t make it right). Instead this crackles with an energy.

“Breakdown” has a healthy dose of funk too, but it understands one key fact: look at pretty much every anthemic hard rock song. The chorus has got to soar – and these do. Every time.

“Limbo Man” is pleasingly heavy. There’s just a touch of AC/DC here (and it is a core belief of MV that if you are doing hard rock and it doesn’t have a bit of AC/DC/Thin Lizzy/Motorhead in it, then you are doing it wrong.

There’s a southern swagger to “Dream Alight” like it has been listening to Skynyrd ballads all morning and thought it would pop down to Muscle Shoals to see what the fuss was about, but if you want to see what The Dust Coda are about – hell, if you want to see what rock n roll is about – then get do not pass go. Get to track four and glory in the incredible “Jimmy 2 Times”, hornier (and I mean its drenched in horns, calm down) than hard rock has been since Little Angels wrote “Radical Your Lover”.

By and large, “Mojo Skyline” is very much the same band that The Dust Coda have always been, it just seems that everything is dialled up a touch here. Working with renowned producer Clint Murphy (Thunder, Manics) might have helped, but whatever, you can’t listen to “Rolling” without realising that this is a band at the top of their game. The solo from Adam Mackie alone is Premier League, and when they find some country tinged, sunny groove that “Bourbon Pouring” you just know they aren’t going to work tomorrow, frankly.

“I’ve Been Waiting” is darker, heavier, the groove more strident, and its as dry as the desert, well, dust (if you’ll forgive me) and I am not going out on the furthest of limbs here to suggest if I compare “Now She’s Gone” to Led Zeppelin then no one in the band will be too upset.

They can’t resist a sly dig at the media, too, with “They Don’t Know Rock N Roll” (and you all want to think yourself lucky that I am not on a rant about the bullshit that is spouted in EVERY rock documentary that “grunge killed glam”) while it lets its hair down with one of the best things here. “Best Believe It” is proof that even  in the deep cuts, there’s gems here.

Even as it ends with the more mid-paced “It’s A Jam” which deals with a toxic relationship in the most jaunty way, there’s brilliance throughout, which perhaps allows for reflection. The overriding feeling is just why? Why when I went to see the band a couple of years ago there weren’t thousands there.

The ending of Line Of Duty the other week was criticised, but that missed the point. The point was surely, that corruption was not hidden away, but hidden in plain sight. So it is with one of Britain’s finest rock bands. The Dust Coda deserve more. Give it to them.