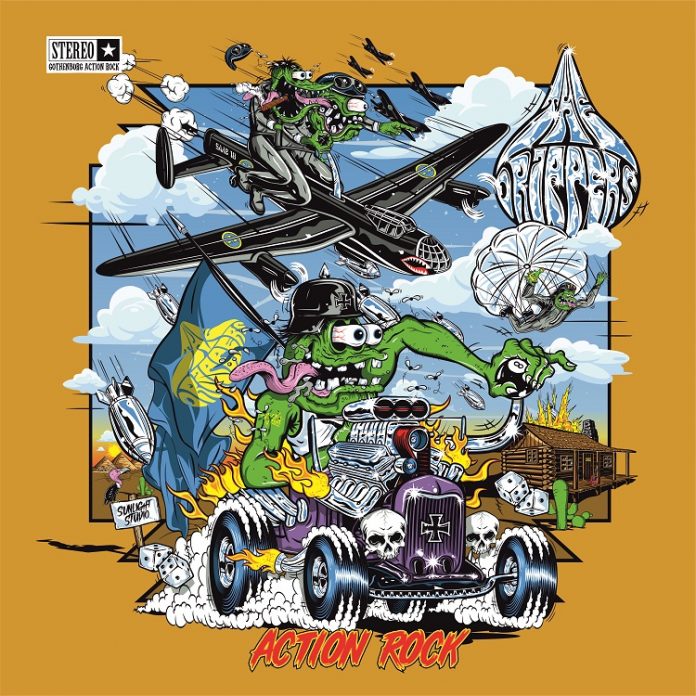 Sometimes, you know, I think I might be wasting my time.

I spend 600 words or more every day explaining the blindingly simple.

Why can’t I be more like Beavis and Butthead? Why can’t I live in a world where everything is either cool or sucks. You either like it or you don’t.

Brevity, you see, has never been a strong suit of mine. I wish I could distil it down to the brass tacks managed by Ollie Williams – the weatherman on Family Guy – who says: “it’s gon’ rain” and that’s it.

See, The Drippers lend themselves to that. Lets have a go shall we?

The way “(Ain’t No) Shangri La” kicks off, is pretty much exactly like “(Gotta Get Some) Action Now!” – maybe that’s what “Action Rock” is? Who knows, it doesn’t matter either, considering that it is 85 seconds of dirty, punky, rock n roll fun.

Hang about, strap yourself in, because there’s another ten where that came from, brother. “Gimme The Shakes” starts with a solo, and William Dickborn (I am just gonna guess here that’s not his real name…..) performs admirably throughout.

There is a bit of “look here comes another one that sounds just like the other one” (bonus points for anyone who gets the reference……) about this, but it does have a look down some filthy alleyways for a different kind of knee trembler.

To that end “Feldman’s Exit” is almost bluesy – if Motorhead played the blues. “Langgatan” is like being pummelled again and again, “we are louder than a voice on the radio” goes a line spat out by Viktor Skatt and he’s not kidding.

Skatt is the man who does the Lemmy bass on the title track too, while “Backbeat” at over three and a half minutes is the longest thing here. Prog rock, right? Well, no, but its catchy as all hell, to be fair. “Let me show you what its all about,” it says at the end of the chorus. You’re alright, it sounds scary. Can I just watch, please?

“Bottled Blues” takes The Wildhearts’ “Suckerpunch” and updates the thing. “Sweet Action” realises it hasn’t done a Backyard Babies guitar line for about five minutes, so is riddled with them.

It is striking, that like obvious peers Zeke, The Drippers can get you wet in 90 seconds but with a proper song. One like “Finskt Blood”, for example, while “Ready To Fall” is sleazy as Stormy Daniels, and still sounds like Electric Frankenstein.

“Day Turns To Night” dots the I’s crosses the T’s and probably still goes home with your good lady. It’s that type of record. Not bothered about subtleties, niceties, or manners, it’s not even fussed about the lights and camera, this is all action. And you will not be able to keep up.