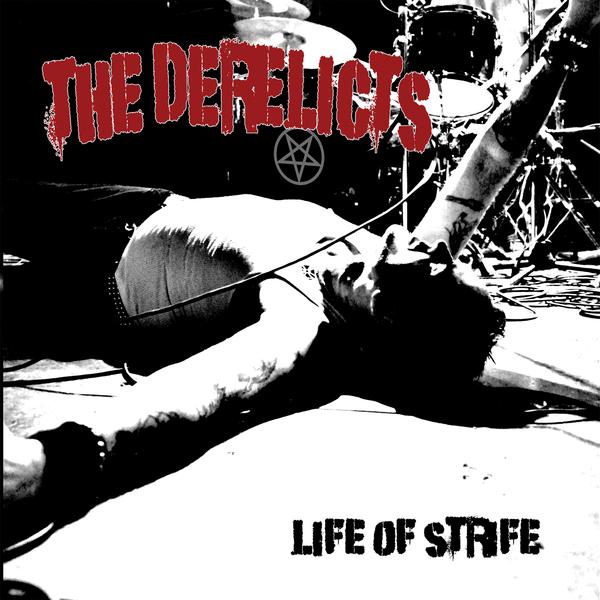 I don’t know how many punk rock reviews start by quoting Counting Crows lyrics in the first paragraph, but nonetheless, there’s a verse on “Perfect Blue Buildings” a track on their debut record, which has always seemed to me to elucidate the thoughts of an insomniac.

“It’s four thirty a.m. on a Tuesday, it doesn’t get much worse than this” sings Adam Duritz, except there is something worse. There always is.

First world problems these may be, but its 2.30pm on a Tuesday, in an office, staring out of the window. Tired, miserable, longing for the life of a rock n roll star that you always thought you deserved.

Then, at that precise moment, like a gift from Satan, you’re checking your phone to see if one of the WhatsApp messages you’ve sent and you wish you hadn’t has been read, when The Derelicts new album arrives in your music website inbox. Even better, its already out, meaning you can get on your phone. And although you aren’t supposed to, no one is gonna give a shit if you stick your headphones in. They can’t see you behind your two screens (one day, I’ll work out what the second is for) and brother, like some elixir from down below, it’s got the cure for what ails you.

27 minutes. 15 songs (and in fairness, I use the word “song” in an extremely loose sense) of nihilism, violence, hatred and volume.

And you have no idea of its healing powers.

This is what The Derelicts say about “Life Of Strife”. It may help. “This is the Derelicts first release in 25 years. The band is a solid unit cranking out some of the best punk since the ’80s. This album has five new songs and a sprinkling of the best songs from past 7″ releases. It is fierce and in your face.”

That passage misses one key thing out. The drummer in The Derelicts is Donny Paycheck. He’s the drummer in Zeke. And if you think they’re nasty (they are) then they are like afternoon tea with a great Aunt compared to the outright belligerence here. Consider this: this is where Donny really lets himself go.

Actually discussing individual cuts is kinda pointless, because they essentially sound the same. The record starts with the idea that you are “stabbed in the back with a rusty knife” (that is the very first line on the title song) and gets angrier from there.

“What’s Wrong With This?” purely and simply wants to destroy. You or it. It’s not all that fussed. “something’s wrong with me,” sings Duane Lance Bodenhemier “bleeding set it free” and Neil Rogers spits out riff after riff all at a million miles an hour.

Occasionally it does something a little more nuanced. “I Walk Alone” has a kind of sleaze metal air, but then whatever sleazy shit it does would probably a)involve something illegal, probably and b) be over dead quick.

“Boxed In” pummels you for about 80 seconds. “Makes Me Sick” is – at over two minutes long – a veritable prog affair and it punches the air with glee. “Mr Fuckerman” to be honest, could be about anything, I can’t actually tell a word Bodenhemier says, and when he says “ring a ding ding” at the start of “Save Your Lies” you end up wishing mercy on whoever’s soul it is aimed at.

“You Loose” has a mighty bass thing going on, courtesy of Jason Freeman, and as much as you’d like to say that “Fuck You” didn’t sound like you know its going to sound like, it does.

“Bleed Me Out” one of only a couple that are over 90 seconds, is perhaps the most fully-fledged of all of them, but that’s not a criticism of anything here and you simply have to love a song that has at its heart, the line: “assholes, I hope you die” for 14 seconds. That’s “Time to Fuck Up” and that’s how this ends.

I have no idea which are the new songs and which aren’t. To be frank, I don’t care much either. What I know is sometimes you need some laser guided rage in your life of strife, and The Derelicts absolutely kill it.

Previous article
BAND OF THE DAY: AUTOGRAMM
Next article
FRANK LANDS A NEW ONE