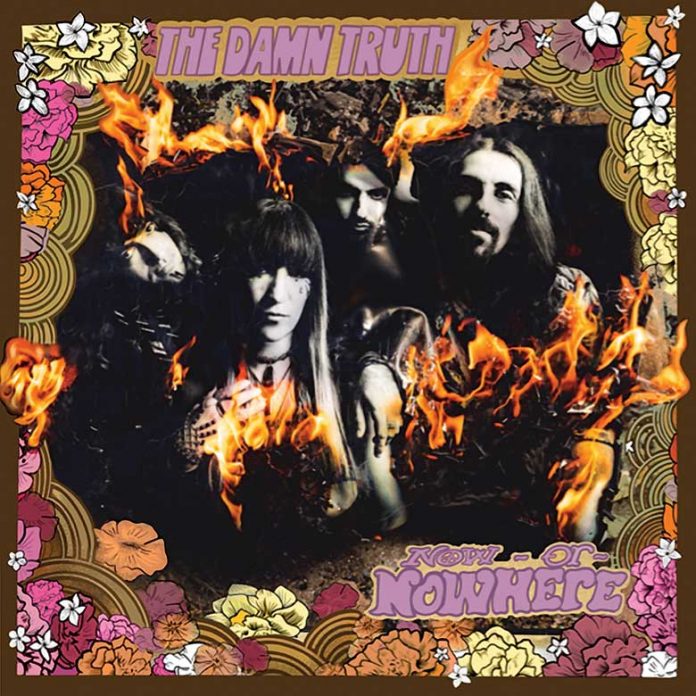 As paragraphs go on Press Releases, this one – it has to be said – is right up there:  When Lee-la and lead guitarist Tom Shemer first met, they were both naked at a hippie festival not far from the Sea of Galilee: “Yeah, totally naked. Just Lee-La and her guitar,” Tom adds. “And we’ve been together ever since. No pretensions. Nothing to hide. Just love.”

That was the first thing I noticed about The Damn Truth, the second was the cover of the record. All kinds of things are going through your head upon seeing it, and amongst them are “acid casualties at Woodstock” and some free love commune right in the wilderness.

Mostly, that kind of thing passes me by – to be truthful. Like I used to love Rival Sons, until they got all whimsical. Thus, frankly, as I only review things I enjoy (and even then don’t get time to do them all), I wasn’t imagining reviewing  “Now Or Nowhere any time soon.

Much less that it would be one of the finest, purest rock records of the year.

Right from the opening strains of the “This Is Who We Are Now” it is abundantly clear this is special as it gets. And let’s say right from the get go that Lee-la Baum has one of the more astonishing voices and also the album is a damn sight more to the point than I expected.

Grooving like Glenn Hughes, but with just enough grit and sleaze to make it dirty hard rock too, there’s scarcely a wasted moment here. “Tomorrow” is a case in point, starting with a riff that knows its Guns N Roses, and then exploding with a sheer glee. Think Blues Pills without the soul moments. No, here there is an urgency.

And goodness me, if these aren’t choruses made for radio then we might as well pack in.  “you just need to let it all hang out, scream and shout and dance about” sings Baum here, and maybe appropriately given the situation they met in, this lets itself go.

“Only Love” starts off like it wants to be a Heart-style power ballad, but it ain’t going to be contained and it’s a proper 80s arena rocker, while the slinky, filthy blues of “Lonely” rather sums the band up. There’s a breathless opening and the thought “I spent all my cash, in the alley smoking hash – and its meal time.” And you can only speculate as to whether this is really happened (of course it did!)

“Everything Fades” has a beautiful, shimmering quality, but somehow, the primal, earthy thundering of the drums of “The Fire” suits them so much better.

In truth, there’s nothing they can’t do and a perspective unlike anything else. “So Innocent” is a case in point. There’s a verse here about buying pets that a) shouldn’t appear in a rock song but b) works incredibly.

They follow this with “Full On You”, a touch of The Faces maybe, but what a swagger, what solos, what a song! Even as it ends with the Led Zeppelin tinges of “Shot ‘Em” you are struck by the fact that although you’ve heard a lot of music like this, you’ve not heard anything quite like this.

On the aforementioned press release, it talks about The Damn Truth hiding in plain sight, and this is their third record, so you kind of get it.

This time, though, they’ve pulled out the stops, Bob Rock (Motley Crue et al) produces half of them, Vance Powell, Nick Didia and Mike Plotnikoff (mixers to Springsteen, Jovi and all kinds of Premier Leaguers) make this sound incredible.

Look at them names again: Jovi, Springsteen. Remember it was their third album that made them stars. The Damn Truth are going the same way – and I’ll say right now that there’ll not be a better hard rock record in 2021 than this one. “Now Or Nowhere”? How about right now.