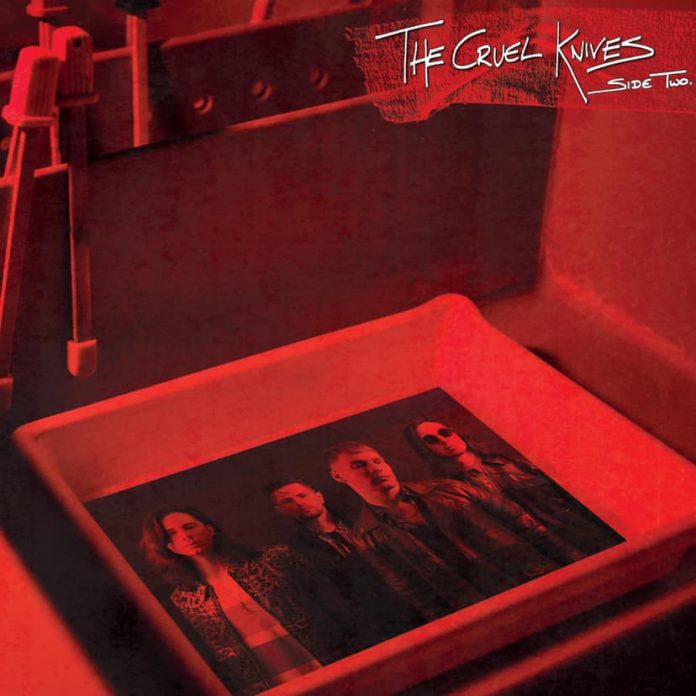 My dad sees the passage of time like this. When you say to him, “blimey dad, its ten years since [insert event here]” you can guarantee that the next thing out of his mouth is: “yeah? Star Wars is 42 years old….” As if the argument is won.

For me, it’s albums. Quite how, for example, “Appetite For Destruction” got to be 32 years ago, is still beyond me. And that, really, is only exacerbated by this hobby. Bands send you albums, EP’s and then a second one comes and you go “crikey, they only stuck that out a few months ago” to find out it was years back.

That happened with The Cruel Knives. It shouldn’t have been two years since I reviewed their debut record “Side One”. But it is. And now the boys – still including Sid Glover and Rob Ellershaw of Heaven’s Basement fame – are back with the seven tracks that make up “Side Two.”

It is clear too, from the off of “Black Eye Friday” that the class on the first one was no fluke either. But it is also clear that they have moved things on a touch.

It’s there in the epic opening. The fact that it takes its time to do its work. The chorus, is punctuated with a real class. Not too dissimilar, in honesty from Stone Temple Pilots at their absolute best, it is a belter of a start.

There’s more where that came from too. “Hollow People” the current single, pulses. Sort of like QOTSA jamming on some glam rock stompers with Royal Blood. It is interesting that where many bands in the current hard rock crop look back for their inspiration, that while there are obviously elements of classic rock in the sound, this is more forward thinking and modern.

“If This Is The End (I’ve Been A Fool From The Start)” is bluesy, even a little sleazy, as Al Junior proves his versatility on guitar, as he does again on the interesting riff of the highlight here, the superb “Maybe I Should Know”. One of those ones where you can sing the chorus the next time you hear it, it is everything really, that modern hard rock should be.

That, in fairness, could be said about any of these. “Blood In The Water” has a big, thick, chunky riff and clever lyrics. “On A Leash” punches, crunches, and still delivers knockout blows, while Ellershaw’s bass throbs on “Cruel” and provides the bedrock for this to be built on.

EP? Mini-album? I never know then things get to be more than six tracks. I’ll let others debate it. But whatever “Side Two” is get on it. It’s a cracker from a band with plenty to say. See you in a couple of years, yeah?

Previous article
BAND OF THE DAY: MAD HAVEN
Next article
WHERE FOR ART THOU, ROMERO?