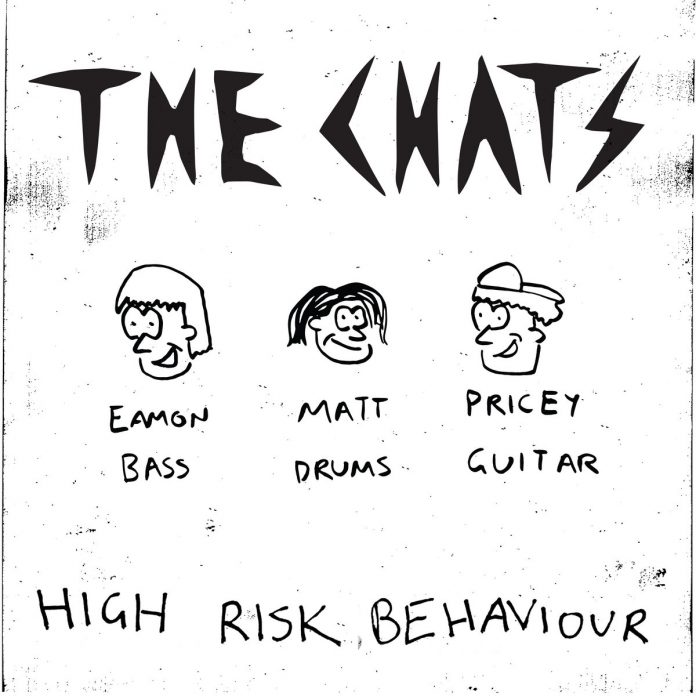 My parents returned from holiday when I was about 17 (that’s a LONG time ago), and my late mother says: “oh, I bought you something in the airport. Saw this and thought of you…..”

With that she hands me a fridge magnet type thing that read: “I don’t discriminate, I hate everyone….” To be fair to mum, she’d pretty much nailed it.

The Chats, I am going to guess here, are cut from the same cloth. There are 14 songs on “High Risk Behaviour” and if you aren’t offended by at least one of them, you are doing well – or you are like me and don’t offend easily.

Lets set the benchmark, shall we, as a kind of Litmus test? This week, there was a story that British tabloid The Sun had lost £68m. The best tweet on the subject today said this: “If The S*n goes bust I’m going to wank myself dry. When I come it’ll be like banging two blackboard rubbers together.” Now, if you re upset by this, disregard the rest of this. If, you Retweeted it, then brother, read on, *guess which one I did……*

“High Risk Behaviour” isn’t one to play your nan. Put it this way, every single one of them has the “E” for “explicit” on Itunes, which is wonderful going, to be fair, but goodness me, The Chats are truly brilliant wordsmiths.

Look, this is exactly what punk rock should be. It is nasty, dirty, offensive, and snotty as fuck.

“Stinker” about the Queensland weather (“you don’t get used to heat up here, you learn to fuckin’ live with it”) gives way to “Drunk N Disorderly” (“two lines of gak in the car park”) and by now you have the picture.

The best of all, though, is “The Clap” which laments quite incredibly ”I was cautious, double wrapped” and if there’s ever been a better diagnosis from any Doctor than “mate, you’re fucked” then can someone send it me, please?

Everywhere you look here there’s a punk classic. “Kids Need Guns” chugs along on a bassline as Eamon Sandwith, who shares vocals with guitarist Josh Price too (I dunno which one is which nor do I give a monkeys) excels, and “Dine And Dash” is about as unapologetic as things get.

“Keep The Grubs Out” is 93 seconds of sticking it to the man, “Pub Feed” is the most obvious “something greasy, gravy and meat” they sneer – now, if I wanted to analyse I could say, it’s what the band do too, keep things simple. That’s true, but it does them a disservice, because I genuinely believe there to be a kind of genius here. A twisted, odd kind, but I’ll stick with it.

The drums of Matt Boggis anchor down “Heatstroke”, “Billy Backwash’s Day” which basically involves a local yokel swearing at tourists (“you can’t call me a racist, cos I discriminate ‘em all the same”) and if “4573” initially wants to do something a tad more nuanced then it quickly gives up.

That all being said, there are some brilliant, timeless punk classics here. “Do What I Want” has a bit of an Eddie And The Hot Rods pub rock about it, and “Better Than You” broods, kinda drunkenly, but makes its feelings known. They are better than you, and that’s all there is to it.

You might not think they are. You’re wrong. You might be offended, if you are that way inclined and if you are, you are probably the sort of person who is outraged about fucking everything. Let me tell you this, though, I imagine that The Chats aren’t a band with too many shits to give. “High Risk Behaviour” is more than a great rock n roll record. Christ knows what exactly, but punk rock in 2020 is going to get no better than this.