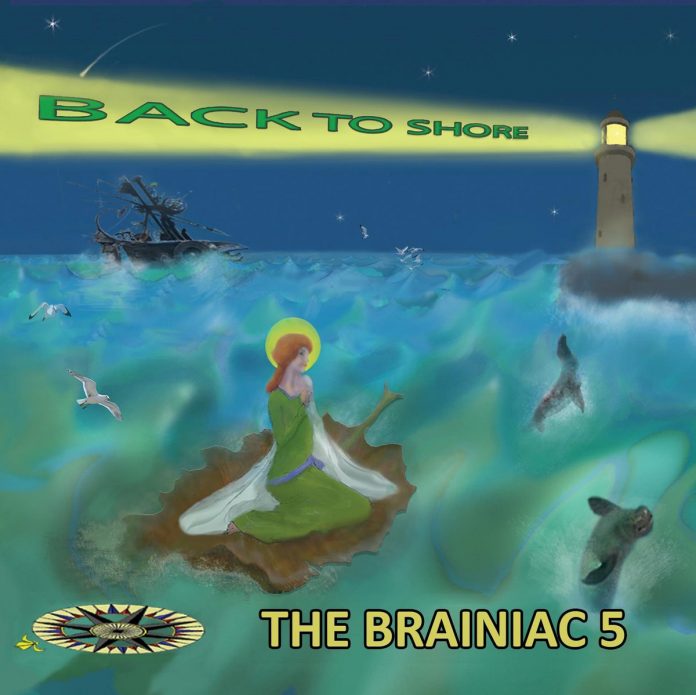 Brainiac 5 were formed out of the ashes of free festival favourites the Half Human Band, Since reforming the band have successfully maintained their 1970s core psych/punk tradition but have also shown a willingness to increase their range of styles/influences and to work with a range of guest musicians.

The opening track `Long Enough` is an all-out psychedelic attack, which would not go amiss in a set by today`s version of Hawkwind, the vocals are quite understated and there are some cracking guitar inflections throughout. For this album the band wanted to experiment, and this willingness has been taken a step further with the title track `Back To Shore` which, is made up of four parts and covers a fair chunk of this release. The quartet of tracks that make up the “Back to Shore” section, the approach has been totally new. For these a simple, hypnotic, looped backing track has been used throughout. Initially this loop was sent out to past band members and associates together with a few friends, some of whom had never heard the band. Some vague suggestions were given, but the musicians were encouraged to come back with whatever they fancied. Part one `A Woman`s Work` is a charming, enticing almost melodic trip, Cornish folk legend Chrissy Quayle aka the Mermaid Of Zennor`s vocals blend in wonderfully as we enjoy some flute tinges before the song takes more of a punk element towards the latter part. Part Two `This Way` has some delightful Jew’s harp and harmonica nuances with reggae DJ and toaster Oxman adding his deep vocal tinges as the track expands and builds. When you seem to have relaxed into a safe space, the song takes a slight angle with some bagpipes, thumb piano and some hypnotic jazzy sax splotches. Part three `Tribute To Alex Ward` is more up tempo with the bongos laying down a foundation for the guitar to freely contribute. The whole song seems to have a pleasing reggae vibe about it. Although saying that it does start and stop in places. Part Four `The Seal Man` opens with a church bell ringing as the song gently awakes with tambourines and sublime saxophone splashes create an entrancing beat with vocals softly and not so softly shared. Sublime.

Duncan Kerr`s composition `Elegy` is another bit of experimentation, very simple but very effective and blends in perfectly. `What We Can` brings us back to what we have come to know as the roots of this outfit. This melodic tune has some fine guitar touches and the vocals really suit this piece. The album closes out with `Breaking Up` a more strait forward rock song, a real thumper.

I take my hat off to the members of Brainiac 5, Charlie Taylor, Duncan “Mad Dog” Kerr, Wayne Worrell and Joe Malone for undertaking this experiment and not playing safe. It has proved to be a fascinating trial that has thrown up some amazing and unexpected music. There can’t be many albums that incorporate Jew’s harps, penny whistles and highland bagpipes, but this one did quite successfully. A thoroughly enjoyable offering of psychedelic musings, guitar shredding and jazz flavours, all delivered with a punk attitude.