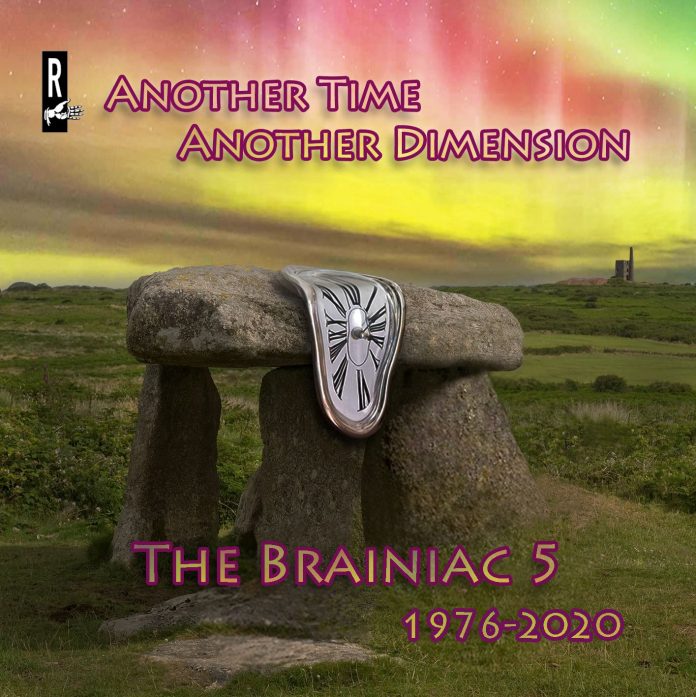 Brainiac 5 were originally a Cornwall-based psychedelic punk band, who came to prominence in the late seventies and took their name from a fictional superhero character who exists in the 30th and 31st centuries of the DC Universe and is a long-standing member of the Legion of Super-Heroes. The band have a new album with `Another Time Another Dimension` which is a mixture of archive material including ten tracks from the band`s initial Cornwall period (1976-1980) and a couple of newly written numbers.

The album opens with `Spring Fever` which has a funky dance like vibe, the kind that will have you up and jumping around at a festival. It does have that of the time feel but is very enjoyable all the same with a cracking guitar solo midway through. There`s a much more reggae vibe to `I Call Your Name` with a drum and bass line that will not fail to have you swaying along.

`Jet Fighter` is a straightforward rock out with some thumping drums, a blinding guitar solo and oddly captivating vocal harmonies. We have quite an upbeat number with `Dancing In The Sun` which had reggae hints and was a little eclectic but did have a chorus line for singing along to.

`Khazi Persona` to me had a sort of prog texture with some intricate guitar chords that put me in mind of Gang Of Four at times. Is the title a clever way of saying you`ve got a shit personality? There`s a cover of `Tobacco Rd` a bluesy number that was a hit for The Nashville Teens in 1964. It`s a faithful copy with maybe a bit of a heavier feel and again has a superb guitar solo.  `Flying Tonight` is a song that veers towards punk and shows the band were more than capable of cutting it live. We enjoy a cover of a favourite of mine with the Move and Electric Light Orchestra`s `Do Ya` written by Jeff Lynne. I have to say there was much to enjoy with this live version.

`I Feel Good` is an all-out just over two minutes punk assault with an amusingly shouted harmonic chorus. Short but extremely sweet. There`s a sort of psychedelic musical jam with `The Warning` which does have some vocals joining in around the last minute or so.

`Pain In The Bowl` is just short of seven minutes long and is a trippy, kind of far out journey with distorted horns, guitar riffs, jangly percussive chimes and a bongo that seems at the heartbeat of the number. A song from 1995 and recorded in the USA during the band`s so called `wilderness years`. I thought that `Sludge` had a Hendrix `Foxy Lady` sensibility about it and again highlight`s the band`s capabilities in a live situation. Another head funk of a track.

`Never Say Never` is a stripped-down submission featuring three of the original members, Bert Biscoe, Charlie Taylor, and John ‘Woody ’Wood and has a real edgy sort of nervousness to it. We seemed to have a mariachi like introduction to title track `Another Time Another Dimension` before a piano takes over and leads us through this bluesy offering which has harmonica tinges and some delightful additional vocals from Chrissy Quale.

The album closes with `Our Devils` an eight minute long epic piece that has all sorts of layers and textures. It reminded me of Men At Work one minute with the flute sequences, then 10CC with its reggae tone and also Madness with the bouncy piano like texture. We also have a Jew’s harp and harmonica hues thrown in for good measure. A wonderful eclectic and quirky number to end on.

It`s been a couple of years since the last Brainiac 5 album so it was good to hear some new material and some older stuff that I hadn`t heard before. Most of the records currently released are understandably based around the current pandemic, so it was good to hear something with a fresh perspective. This was an absorbing release from a band who have always delivered whatever they do with a punk attitude.