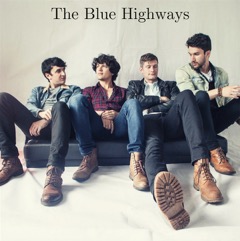 I was inclined to like The Blue Highways even before they’d sang a note.

The reason? Well that’s a Philadelphia rock band called Marah. Revolving around two brothers, who me and my brother saw back in the mid 2000s and whom we enjoyed so much that we formed our own rock n roll band. On the way home that night.

We got as far as looking at vans – Chris, my younger brother fancied driving one – but had no talent or musical ability of any kind.

Still, I’ve always loved bands with brothers in, just for that. And Blue Highways, you see, have got three of them. Callum Lury (Vocals / Rhythm Guitar); Theo Lury (Drums), & Jack Lury (Lead Guitar) so in many ways they are the band the Thorley’s could have been, you know, had we had any talent or anything like it.

This is their debut EP, and straight away you can see why they’ve been so highly rated. Accolades and support slots all over the place. Get used to seeing them a lot more too, because debut EP’s shouldn’t be this good.

It’s obvious from the start of “He Worked” that this is pretty classy and more to the point, pretty special. Horn soaked, not a million miles from Southside Johnny, perhaps. It tells the tale of a bloke who looks back on his comfortable life and wishes he’d been a rock star (see there was a point to that intro, I might be able to relate….” But there’s a real chug to the guitar work too, as well as a pop hook to die for.

That said, these songs don’t get bogged down in any one style – indeed it will be interesting to see where they go as they develop. “Blood Off Your Hands” is a more soulful discussion on religion, and the piano here is from the top drawer and gives a Muscle Shoals vibe to this London air.

This is contrasted brilliantly with the last two. “Matter Of Love” is some pulsing Americana, but not following the normal path, indeed those that love Curse Of Lono (and if you don’t, you should) might be able to recognise something of a kindred, alternative spirit here.

The final one of this quartet is real, proper country. Lap Steel and all, it is fragile and there is a cracked, world weary tone to Callum’s voice as if even the narrator of the story doesn’t really believe when he’s asking “have you seen my baby” in the song of that name that she’s coming back.

He still hopes, though. Just like I hope I’ll be in a rock band one day. Not my brother, though. He’s all grown up. This one is for the dreamers. And these are our boys. For The Blue Highways, the sky is the limit.