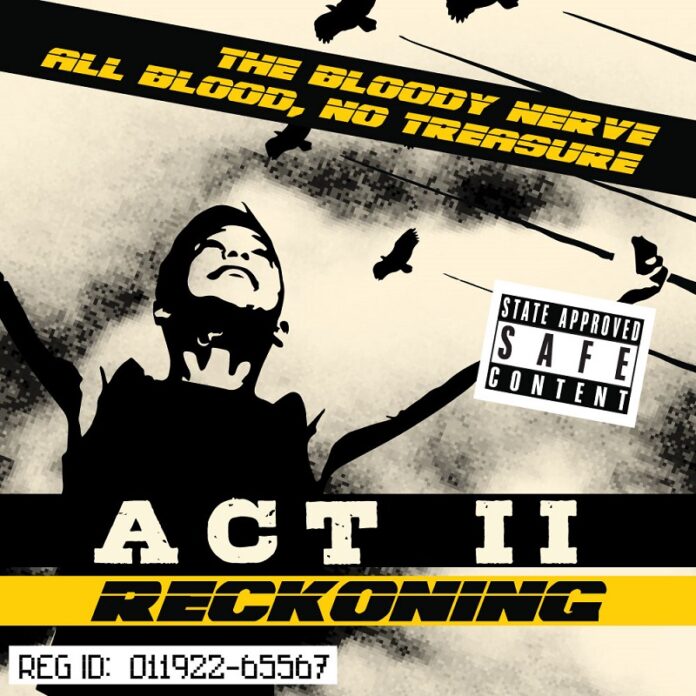 I’ve always been a sucker for a series. The Sopranos, The Shield, The West Wing (not Game Of Thrones, mind you, that’s absolute rubbish and I’ll die on that hill) or Minder (one for the kids there).

Welcome to the musical equivalent.

In September last year I reviewed Part 1 of “All Blood No Treasure” and “Retrograde” was superb. Now along comes the next three, and “Reckoning” is likewise.

So now its time to go a little deeper I guess. From Nashville, but no country to be seen, a couple (and how do people work with their partner?!) what exactly are TBN? The answer is no one really knows. Their debut record “Taste” doesn’t seem to have any clues either – I know because I got involved in it after the EP – and this EP is distinctly different from the last one. Called “Reckoning” says the band’s Laurie Ann Layne, because we “always end up back here”. Maybe that’s the point. Maybe that’s the eternal question?

Even if you take this as just three songs without the back story, then they’re way different to their peers.  “All Blood, No Treasure” is a proper hard rocker. Stacey Blood intones “darkness has a way, of making you of beg for a grave,” while Layne adds some harmonies. Oddly discordant, yet arena shaking at the same time.

“Down to The Letter” on the other hand is all 80s keyboards, so much so that you’d swear “Sledgehammer” is going to break out at one point. Indeed, the only thing I am remotely certain about when it comes to TBN is that they can write a hook that sticks like glue.

Even allowing for that, though, the delta blues of “Doin’ All Day” – acoustic led and with a gospel flavour, at least until it explodes into a stomp – comes as a real shock of a close. Thing is though, this wouldn’t be The Bloody Nerve if they didn’t give you something to chew on, and the loop that plays out: “you won’t be free until you see” is probably designed as a cliff-hanger. More practically though, it seems to underline something that is never far away with this pair and that is this: there is just something a little unsettling lurking beneath.

They’ll probably show you what it is by episode four. It’s the guessing that works best with these series’ though, right?