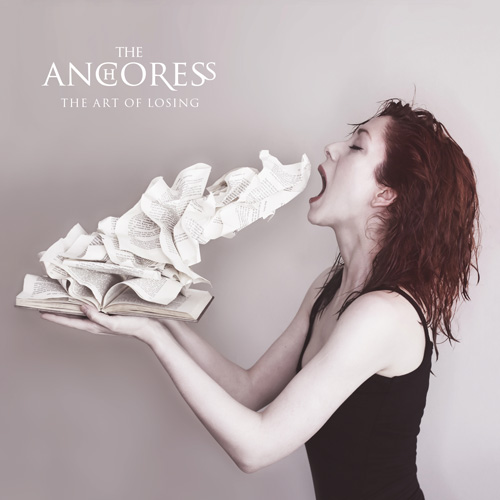 The Art of Losing is the second album from Welsh producer and multi-instrumentalist The Anchoress (aka Catherine Anne Davies), following in the wake of her debut album and recent collaborations with Manic Street Preachers, Bernard Butler, and Simple Minds. Written and produced by Davies, The Art of Losing is an album made in the process of trying to climb out of grief and explores how we make something from the losses in our lives. The record’s title is inspired by the opening line of the Elizabeth Bishop poem ‘One Art’ and was written in the aftermath of several years of huge personal loss and follows Dylan Thomas’ instruction to “rage against the dying of the light

The album opens with `Moon Rise (Prelude)` a deeply mesmerising instrumental with just the use of piano and cello, giving it a stark and slightly distressing feel. The track is a Max Richter-inspired orchestral instrumental piece. Again, a piano and strings lead us into `Let It Hurt` which is fleshed out with drums and a bass line where the vocal has a sort of echoey feel. It explores “the ways in which we distract ourselves from grief” and is slightly disconnected and a little detached but so engaging.

Nina Persson and Traci Lords have both dueted with James Dean Bradfield on Manic`s albums so it was interesting to hear this songsmith guesting on somebody else`s album and on the track `The Exchange` Along with Catherine, the duo`s powerful voices really complement each other in this terse number that explores “the unhealthy ties between two people”. The darker side of rock and the loss of a friendship over the #MeToo movement is explored on `Show Your Face`. It`s almost post punk musically and enjoys enormously wonderful guitar chords akin to something Geordie Walker from Killing Joke is renowned for, unsurprisingly they come from the gifted fingers of James Dean Bradfield. The drumming is also sublime which was crafted by Sterling Campbell of David Bowie fame. There are layered vocals that are so forceful, you cannot fail to comprehend the anger unleased by the singer against the perpetrator in this narrative.

Title track `The Art Of losing` is a wonderfully captivating listen, an examination of what we learn when we lose. Lyrics such as “Was there some purpose to losing my mind?” and “What did you learn when life was unkind?” seem to cut right to the point. Loss and grief are something, that from experience, do make you question so many things as to, Why? There`s a much slower pace to `All Farewells Should Be Sudden` where the vocals have a sort of slightly growly, rumbly throaty pitch at times, the vocal equivalent to fingers gliding along the frets of a guitar. It`s a quite deep, nigh on profound piece where the pain in the vocal delivery is almost visible and closes out with some ringing church bells.

`All Shall be well` seems to be another brief Max Richter-inspired orchestral instrumental piece. I read somewhere that `Unravel` is comparable to a twentieth-first century reworking of ‘Running Up That Hill’, colliding with the chorused guitars of The Cure and the singer locked herself in a cupboard to record the vocal to capture that sense of claustrophobia when you feel as if you don’t know where to turn. It does hint towards that classic song but to just pass it off as such would be doing it an injustice. The lyrics have such an intensity such as “And on your knees you said This love is dangerous And then we hold our breath Our love is dangerous” exhibits.

`Paris` is another short composition that isn`t an instrumental as such but accompanying the potent piano and cello there seemed to be some sort of quiet restrained conversational chatter. We have a number that is a challenging, tough, and emotive listen with `5AM`, written around the primitive physical impact of sexual assault and baby loss. It`s difficult to sum up in words and I’d suggest people will take what they want from this reflective offering.

`The Heart Is A Lonesome Hunter` has an edgy quite uneasy texture about it and reminded me of the intensity and gravity PJ Harvey wrung from similar songs like `The Slow Drug`. Lump in the throat stuff. I felt the drum beat was like a heartbeat throughout `My Confessor` a really mesmerising track that had some fluctuating synth waves as it progressed to a real cacophony of controlled noise before reigning back again.

`With the Boys` opens with the sounds of a school playground then a cello and vocal and keys that relate to the male-controlled dynamics of the music industry and the price of doing business in that world – ‘gotta know what bruises are for”. This release closes with `Moon (An End)` the final orchestral instrumental piece which this time again has some indecipherable chatter merged throughout.

`The Art of Losing` is certainly not an easy listen. The subjects it encompasses are always uncomfortable to be reminded of, female sexual exploitation, death, grief, loss but whereas it could have become quite self- righteous and preachy, I felt it managed to attain the right balance. I thought the singer had a voice that hinted at Kate Bush and Tori Amos but retained her own character and style. The Anchoress (Catherine Anne Davies) has been lauded by The Sunday Times and the Guardian and has gained followers such as Peter Gabriel, David Gilmour, Toyah Wilcox, Robert Fripp as well as The Cure’s Robert Smith and you can understand why. This is a stunning, brave and i`m sure very cathartic album for the artist to have made and shared and I for one will be intrigued as to which direction she takes in the future.