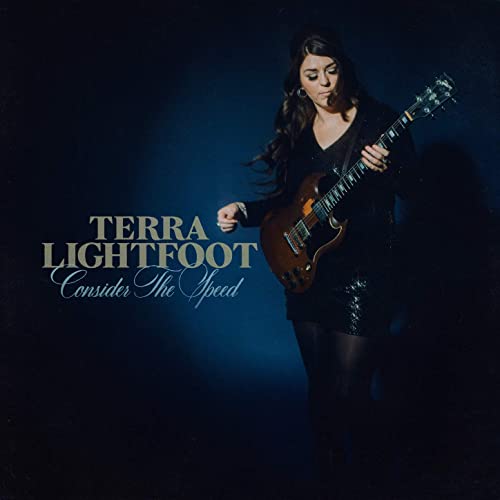 After Canadian bluesy rock singer-songwriter-guitarist Terra Lightfoot returned home from two years of promoting her third studio album “New Mistakes” the exhausted artist seemed bereft of ideas for her next release. But that all changed during a trip to Nashville where the songs for her latest release “Consider The Speed” came to her. Inspiration arose from reflecting on life as a touring musician, past relationships, and the death of her grandmother. The album was recorded with a stellar group of session players including Steve Potts on drums, Davy Smith and Eli Abrams on bass, Lester Snell on keyboards and Sharisse Norman and Candace Rayborn-Marshall supplying backing vocals and harmonies.

The album opens with `Called Out Your Name` a very soulful composition with some really driving guitar chords, swirling organ, and subtle vocal harmonies. I loved `It`s Over Now` a thoroughly captivating number where the narrator is not quite matter of fact but quite resolute in their belief that this relationship has ended and they`ve moved on. As if to reaffirm this they even call their significant other “ex-lover” in the repeated chorus. The thumping beat of the chorus really makes it stick in your head.

`Empty House` is a slow burn with a heartbeat of bass and drums plus the occasional guitar riff. A song relating to missing a partner when they`re away. Terra`s seductive vocals really give the impression of that sense of emptiness of being alone. There were some wonderful organ refrains throughout `Love You So` a love song where the heartache in the vocal delivery almost seems as if the raconteur is admitting this for the first time.

Title track `Consider the Speed` is a thumping driving real foot tapper of a tune that`s made for cruising along motorways or highways with the windows down and the sound cranked up loud. There`s a more mid-tempo tale of a relationship ended with `Lost You Forever` which enjoys some deep organ refrains throughout.

`Midnight Choir` is a more uplifting almost gospely bluesy piece with pounding powering beats, delightful piano swatches, and sweet backing harmonies. A story of a wanderer comes with Ramblin’ Rose`, seemingly a reminiscence on a relationship that has or will run its course.

There`s some cracking guitar licks in `Paper Thin Walls` a song of heartache caused by somebody unreliable, Terra relays “I wrote this song about overhearing someone you love sharing some harsh words. I’ve tried to modulate my reactions to things like that, strived to be calmer in my interactions even when I feel strongly”. The track has it`s rock out moments and is pretty anthemic. We have a laid-back offering in `One High Note` which has a bluesy late-night feel with some delightful horns / brass interludes.
`Two Wild Horses` closes out this album and again it`s another laid back quite bluesy composition with some intricate guitar chords and Terra`s husky vocal delivery.

“Consider The Speed” was cracker of an album and a fabulous introduction for me to Terra Lightfoot`s work. The first thing you notice is her marvellous vocal range which i`m led to believe has a multi octave mezzo-soprano range and ensures that she can certainly belt out a tune. This with her guitar playing ability and song writing skills adds another dimension. Canada has produced a few rock / blues icons over the years, predominantly male. Terra Lightfoot could be the one to readdress this gender balance.