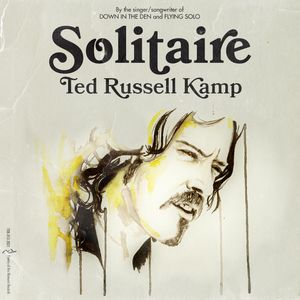 Just the words can create a yawn at this point. Like the phrases “gentle comedy”, “a sideways look at….” Or “reality TV”, then frankly, I am getting to the point where I read “lockdown album” and glaze over.

The press info that came with “Solitaire” got to the point pretty quick. Ted Russell Kamp used to play 200 shows a year, when the pandemic hit, he holed up in The Den, his home studio, to make this collection.

Now, I used to go to 100 gigs a year, I used to watch football, I used to see my family. We get it. Things changed. But the thing is, Ted Russell Kamp gets this too and this is a very different record to the ones I’ve loved of his over the last few years.

“Solitaire” lays its cards out on the table early on. “My Girl Now” has a kind of Tom Petty flavour, but it sounds like the singer/songwriters that I used to go and watch most weeks in the local folk club. That’s the point really, given that it sounds very much like a “solo” record (TRK plays about 90% of it himself).

And one thing I’ve learned about Ted over the years is this: whatever he does is usually magnificent. This is no exception. “Path Of Least Resistance” is perhaps the best thing on show, and it sounds more like early Dylan than you’d imagine.

A rare guest here is  Vanessa Olivarez, and her brilliant harmonies are all over another of the highlights here, “You Can Go To Hell, I’m Going To Texas” and the lap steel here is worth listening to the album for alone, frankly.

Matt Szlachetka – an old friend of Kamp – co-writes the fragile and beautiful “Birds That Sing At Dawn” and the funky “As Far As The Eye Could See”, built around a Kamp bassline, but sounding not unlike a latter day Elvis tune, while “The Hardest Road To Find” changes vibe again and has a feel of something that might have been hatched in Laurel Canyon in the late 60s.

That’s what Kamp does. His records are always varied, but this one seems moreso. And definitely more raw and claustrophobic. “Solitaire” – the track – is just him and his acoustic, while “Western Wind” has an almost Celtic taste, and “Be Your Man” is dirty blues straight from the back porch.

As a cameo of the album as a whole, that makes sense, because with nothing but time and his own ideas then Kamp is seemingly in his element here, “A Rose Or Two” is as dry as the desert dust and the line about “we waste so much time doing what we need, you gotta make time for what you love” seems to encapsulate the point.

Brian Whelan’s harmony vocals illuminate “The Spark” while the groove of “Only A Broken Heart” would surely have been a full on rocker in other, different times. “Exception To The Rule” seems to be reaching for some light in the darkness and finds it with the outsiders, while the brilliant Don Gallardo plays on the brilliant “Lightning Strikes Twice”. If there was one song here that was going to rouse the rabble in the honky tonk, then its here.

It ends a record that in normal circumstances Ted Russell Kamp wouldn’t have made, but these are (as every damn email you get tells you) unprecedented times. The best find a way in the adversity to spin gold, and on “Solitaire” that’s what has happened.