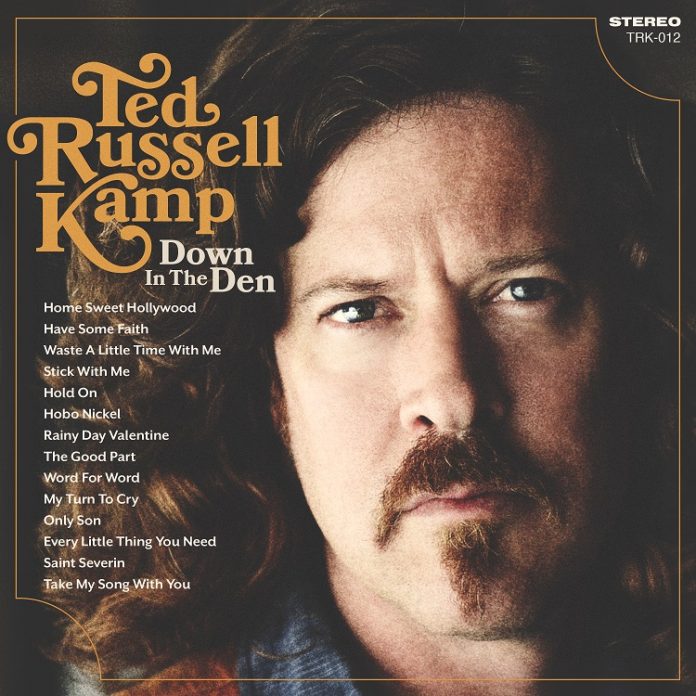 Back in the spring of last year I reviewed a record called “Walkin’ Shoes” by Ted Russell Kamp. It was, I’d said: “13 songs…. of a proper troubadour, of someone who lives on the road and plays his guitar because he can, whether it is for 10 people or ten thousand. That’s a given. What “Walkin’ Shoes” proves, though, is that Ted Russell Kamp can deliver them with a rare skill too.”

Now he’s back, with “Down In The Den” (a reference to his home studio) and it underlines that “….Shoes” was no fluke  – but his 12th solo record does so much more besides.

“Home Sweet Hollywood” – featuring the always magnificent Shooter Jennings –  is a brilliant opener too. Funky, fun and classy, it talks – from experience you imagine – about the struggles that you face as a pro musician in the city and I have to admit to a smile about “them big haired boys down on the Sunset Strip getting ready to pay to play”, given my early tastes in music and the fact that grunge was meant to kill it off….

That doesn’t frame the record (beyond the fact they are all classy in fairness) rather, this is a bit like one of them dramas on TV that see each episode standing alone, but with the odd common thread.

To that end “Have Some Faith” lurks in the shadows of blue intent, while “Waste A Little Time” is the type of thing I always imagine that the streets if New Orleans are filled with. Glorious horn filled fun – a homage to leaving your troubles behind (“we won’t do nothing we don’t wanna do” he sings at one point) and “Stick With Me” is heavy on the lap steel, country in the way Kriss Kristofferson might have been, weather-beaten, 70s sounding and happy on the back roads.

Pretty much everywhere you look there’s something distinct from the last thing, and its tempting to have theories on as to why this is. Firstly there’s the co-writers. There’s a lot here. Then there’s the guests. Like on “…Shoes” if I was to list them it’d take the whole review, and doubtless this all contributed to the melting pot, of course, but then there’s Kamp himself.

“…Den” was originally meant to have a soul flavour. It was even mooted at one point that it might have been called “Ted In Memphis”, before, as he puts it himself: “Then I realized I wanted it to be a more eclectic record so I could include some more of the sensitive singer-songwriter moments” and goodness me, that’s what he did.

“Hold On” is as tender as it gets, the jazz tasting “Hobo Nickel” sounds as relaxed as a man in a hammock with no work to do and makes good on Kamp’s intent to write something that reminded him of Mungo Jerry.

Never is the breadth of material here shown better than on “Rainy Day Valentine” – which sees TRK and his bass do something stripped down – which he follows up with the raucous, hoedown that is “The Good Part”.  The guitar solo – when it explodes into a full on johnny Cash thing – is worth getting the album for alone.

The superb songs continue, everywhere. “Word For Word” is so 70s sounding it could have come off one of those albums where Elton John was in his heyday, and if you’re a sucker for old-time country, you’ll love “My Turn To Cry”. “Only Son” on the other hand is a real foray into folk. Cracked and full of raw emotion and imagery and “Every Little Thing” lives on its bass groove (Ted is Shooter Jennings’ bass man) and “Saint Severin” almost comes on like an outtake from Springsteen’s “The Rising” era.

The thing about “Down In The Den” is that the last one, “Take My Song With You” (a duet with Kirsten Proffit) almost ties up the loose ends. “When the day’s at an end” they sing, “and you need a friend, please take my song with you” and that’s – to me anyway – what this record is about. It is 14 slices of familiarity, if you like. 14 old pals to share some good times with and forget your troubles, even the album cover looks like you know you’ve seen before. That’s why all the disparity makes sense, because there was something magical going on in that there Den.