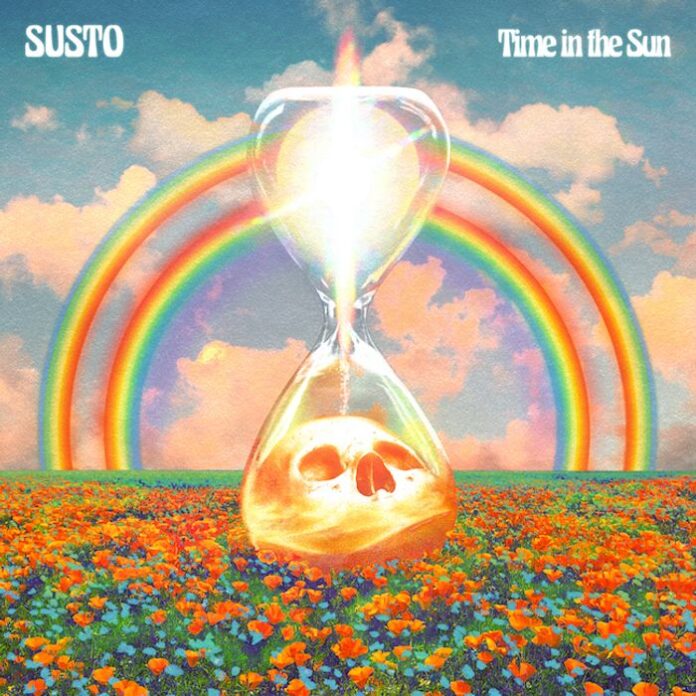 `Time In The Sun` is the fourth full length album from Charleston, South Carolina band Susto.

This album was written and recorded in the midst of a lot of life changing events for lead writer/singer Justin Osborne. He became a father and also lost his own father. The song writing was his way of working through it all. The title `Time in the Sun` is meant to be a monument to his own human existence and also a tribute to the human experience in general. He shares “I guess this album is an attempt at that. At the core though, it’s just a collection of songs about my life and my feelings.”

The album begins with `Time, Love & Fun` which seems to gently open and blossom with a steady quiet drumbeat, plucked guitar, steel guitar and vocals. Towards the latter part the band join in and it becomes a lot heavier and much more expansive rock out. To me there was initially a Modern Lovers `Roadrunner` come Cornershop `Brimful of Asha` texture to ‘Get Down’. Although it has a quite upbeat sensibility, it was written about the singer`s close friend who was battling substance abuse issues and openly discussing suicide with him and their larger friend group.

`Summertime` is a kind of easy going and at times quite hypnotic summery trippy feel good number that seems to reminisce on innocent romantic times gone by. We have a song in `God Of Death` which explores and highlights the devastation that comes with death, the reclusiveness many feel, and then the thought, what’s next? It`s a reasonably paced number with the sentiment shared in a somewhat dreamy way which gives it more resonance.

I felt there was a much more hypnotic texture to `Be Gone From Me` which has some appealing almost resonating guitar chords and a chorus line of “be gone from me, all you problems of the world, be gone” that felt like a mantra to life. Again `Good Right Now` seemed to exude a sense of positivity, another quite mesmeric offering.

`Life Is Suffering` is a wonderfully descriptive submission where the lyrical content really paints a picture of `we ain`t got much but appreciate the little we have` sort of sentiment. I thought the vocal harmonies really added so much. We enjoy some delightful piano keys throughout `Resolve It` which encourages us to find our of way or path in life, another dreamlike otherworldly composition.

`Mother Of The World` is really open to interpretation in so many ways. A view on life on this planet but possibly a metaphor for the person who gave birth to us and was responsible for our physical and emotional care. Another gentle and soothing musical piece. We have in `Double Rainbow` an plea for a sign of better things to come. A double rainbow being the symbol of transformation or in some cultures good fortune. There`s a superb guitar solo in the latter part of this alluring foot tapper.

The album closes out with `All Around the World` which is quite stripped back with just vocals, piano keys and what sounds like a cello. It has a quite melancholic feel although the emotion shared is positive.

`Time In The Sun` is a very thought provoking release and came out of some life changing events that occurred in the writer`s life and i`m sure this album has been quite cathartic. The band have been described as synth driven indie-electro Americana with pop sensibilities which is a fair summation. If you`re looking for something captivating to listen to which will have you pondering life`s big questions, this will certainly satisfy that need.