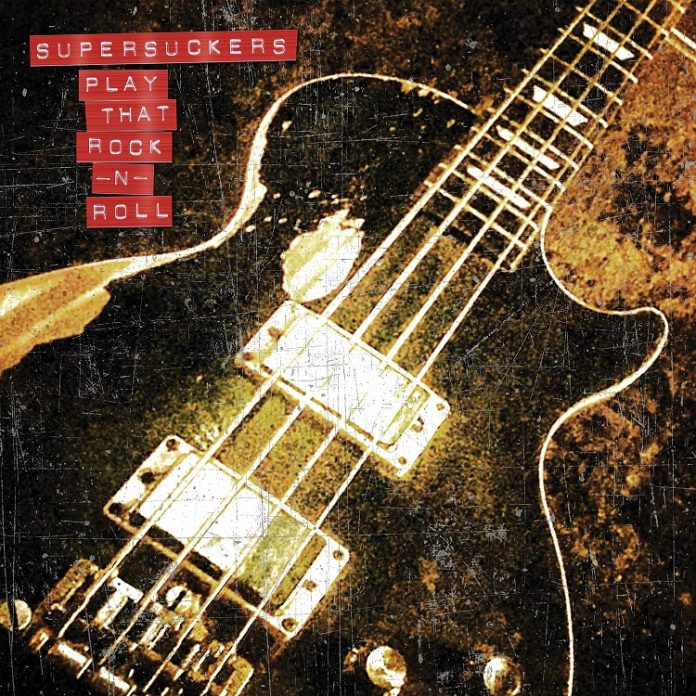 That, right there, is more than the verse to “Die Alone”, one of the songs towards the end of “Play That Rock N Roll”.

Rather, I’d suggest it was Eddie Spaghetti’s mission statement. Actually, that’s crap. Because that pre-supposes that Eddie is the sort of bloke that has a “mission statement”. All he does, really is rock n roll.

Or play country – which he and the Supersuckers are damn good at – they sometimes do that. Not here though, “Play That Rock N Roll” is exactly that. Three dudes. All in their 50s, and precisely no sign of growing old anything other than disgracefully.

I began this review with a quote from the lyrics. In honesty I could have done one from any of them. “Ain’t Gonna Stop” leads us off, but it signposts everything that is to come. Starting with a guitar solo, dammit. Like it’s so bursting to rock n roll it isn’t hanging about. “Ain’t gonna stop,” sings Eddie “until I stop it….”

The message is clear: he’s the king of this castle. And if you want to take him down, then you’d best come heavy.

Thing is, he’s got his crew – and they’re all packing. “Metal” Marty Chandler is one of the great guitarists of the modern age, so versatile, and drummer Chris von Streicher can beat the crap out of the skins, but he can show a deft touch too, when he needs to.

Look, there’s probably been a Supersuckers album that doesn’t rule all. If there has been, then I have never heard it. The title track is a homage to the greats. Eddie takes a mythical trip to see Ramones and Motorhead, before concluding: “all you pussies who rap all the time…..they want that rock n roll”.

That this is done over an almost Stray Cats type sound is indicative of the idea that there’s few that embrace the history of rock n roll better than this lot. The wonderfully bitter “That’s A Thing” disguises its bile over a glam stomp that has more than a bit of “Tiger Feet” about it, “Last Time Again” does the Zeke or Motorhead thing, but on their terms, with a delivery that Billy Gibbons might peer out over his specs about and to be clear “Dead. Jail Or Rock N Roll” is one of my favourite things in the world. I can think of no better band to cover it than The Supersuckers.

Why? Well, because rock n roll matters to guys like this, so  that the kind of power pop flavoured “Getting Into Each Others Pants” (we’ve got off lightly here, considering the song titles on 2018’s “Suck It!”) or the bar room, blue collar, feel of the  blues infused “Deceptive Expectations” probably weren’t planned, more they just happened naturally.

“You Ain’t The Boss Of Me” messes with the blues in a very AC/DC way, “Bringing It Back” pummels like it’s got to get out of town before shit goes down, and right towards the end of the album, they revive the Allen Toussaint written “A Certain Girl” and make it sound like Georgia Satellites “Battleship Chains”, and that, makes it very cool.

Nothing here does balladry. But if one did, it’d be the last one .“Ain’t No Day Like Yesterday” does reflection, but it does it over screeching guitar and something close to psychedelics.

In all candour though, as brilliant as this is, Eddie doesn’t care what I, you or anyone else thinks. That’s why he might just be the coolest man on planet earth, and The Supersuckers might just be the best rock n roll band.