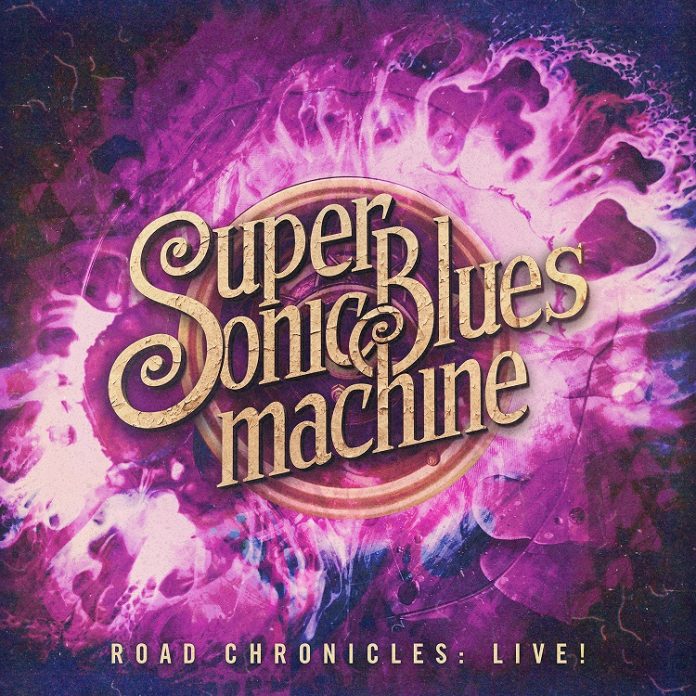 “They said, do that thing.”

“I said, what thing?

That happens about two thirds of the way through “Road Chronicles – Live!” and is precisely the moment that it stops being a straight up Supersonic Blues Machine record at all, and becomes a masterpiece from the King of cool.

Gibbons had joined the band on their ten date run – just as he had on their “Californisoul” record from 2017 (from where “Broken Heart” comes) – and his presence on the last six, including quite wonderful takes on blues classics “Dust My Broom” and “I’m Going Down” shows not just what a brilliant guitarist he is, but also what a fabulous band the SBM are.

This is their first live album, following two mighty studio records, but also the first one to feature Kris Barras on lead vocals. The Devonian takes over from Lance Lopez here, and shows his unbelievable talents.

A versatile band – as this 14 songs proves. They can begin by bringing the soul to “I’m Not Missing You”, but there is a feel that anything can happen here – and likely will.

Much of this is to do with the quality of musician on show, in honesty. Drummer Kenny Aronoff, Barras and Italian band leader Fabrizio Grossi are the faces and the core of the band with The Reverend Gibbons and the party is rounded off with Alex Alessandroni Jr. on keyboards, Serge Simic on guitar and Andrea and Francis Benitez Grossi on background vocals, and with skill like that, nothing here isn’t going to come out of the very top drawer, is it?

“Remedy” allows them all to stretch out over something a little southern rock, while “Watchagonnado” is as funky as it gets and sounds here, to be somewhere beyond fun.

“Elevate” sees Grossi’s bass to the fore, while, like on the opener, there is a real soul thing to the backing vocals, “Bad Boys”, which features a drum solo from Aronoff, offers the thought that: “bad boys keep playing the blues” and, well, amen to that.

This is one of those albums where it, apparently, all came together by accident. Recorded live in Italy, on the last night of the tour, Grossi was given the tapes by the promoter and reckons he and Gibbons “couldn’t stop smiling” – and the sense of enjoyment shines through all over this.

And in amongst all of the wonderful songs here, the essence of the band is captured on one of their own. “Runnin’ Whiskey” is part ZZ Top and part classic blues, and shows the chemistry between such disparate musicians.

Sometimes, these type of all-star bands can feel like a load of people enjoying themselves more than the audience is – offering no names here, but, ooooh lets say Govt Mule, shall we? – not here. Supersonic Blues Machine sounds like a band that you need to see, and this chronicles that just fine.

There isn’t many better than them when they do their thing.