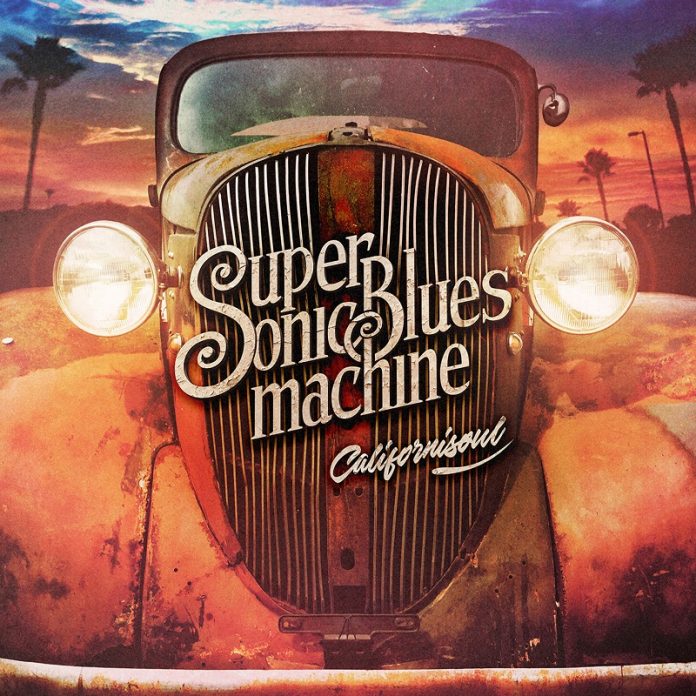 Sunshine blues from the sunshine state

Sometimes, you can tell all by the name of the band. The slew of death metal albums that arrive in the MV inbox every week by groups called Corpse Grabber or some such (we’ve made that one up – we think) mean that you know what you’re going to get.

So that said, if you call your band Supersonic Blues Machine, then they need to be, well, a Supersonic Machine Of Blues. Luckily Lance Lopez (guitars/vocals/songwriter), Fabrizio Grossi (bass, producer, songwriter), and Kenny Aronoff (drums) have never had a problem providing just that.

And furthermore, calling this one “Californisoul” is another clue. This is sunshine blues. Blues for someone who is chilling in the warmth of a gorgeous afternoon with no work tomorrow.  But the skill in this wonderfully laid-back collection is that it works on a grey, drizzly Sunday morning in the West Midlands of the UK (which is handy really given the scene as MV writes this).

As always, with SBE there’s a load of star turns – this record sees Billy Gibbons, Steve Lukather, Eric Gales, Robben Ford, Walter Trout and more. And we might as well deal with them first. Gibbons absolutely, urrmmm ZZ Top’s the lot with the southern fried boogie of the brilliant “Broken Heart”.

Lukather is to the fore on “Hard Times”, which combines an Allman Brothers style grit with a quite magnificent guitar solo. Gales blows in for his turn on the stomping “Elevate” which he turns into one of his trademark funky jams, Ford appears on the harmonica drenched outright blues of “Somebody’s Fool” and Walter Trout cements his status as the Godfather of modern blues on the slowed down class of “What’s Wrong” and, like on his own recent solo work there is no doubt that the special guests are perfectly picked out on “Californisoul”.

However, it is to the eternal credit of Supersonic Blues Machine that it never feels like they are playing on the undercard of their own headline show. And if we may torture the boxing analogy a little further, they deliver plenty of knockout blows elsewhere.

“I Am Done Missing You” for example makes good on the soul part of the title early on, “L.O.V.E”, which sees keyboards man Serge Simic to the fore with some superb work, wouldn’t have been out of place on a mid-period Black Crowes record and “Bad Boys” offers a real dirty groove and you’d best believe it knows where the trouble is at.

It’s striking that there are no real weak spots here – which given it is a 13-song album is no mean feat. “The One” has a carefree air and has the sort of vibe Grossi talked about when he said the record was “the missing soundtrack to a summertime drive from Los Angeles to San Francisco in 1971!”.

There’s one more piece of summertime blues, if you will, before the end. “This Is Love” is reggae infused and Lopez shows himself to be one of the most versatile players and singers there is.

It rounds out an album that is everything modern blues should be and yet so very much more. “Californisoul” is warm, welcoming and a tremendously fun journey.