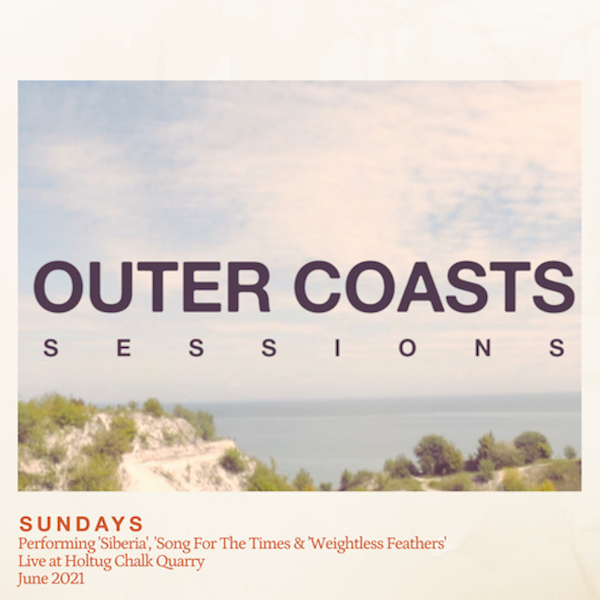 SUNDAYS are a Danish indie folk outfit comprising of Magnus Jacobsen, Morten Falk Overgaard, Marie Linander Henriksen and Victor Ovesen. They released their second album ‘Inner Coasts’ last March but sadly due to the pandemic were unable to tour to promote it`s release. They decided to use this down time and headed off to Holtug Chalk Quarry on Denmark`s south coast and rerecord three songs from this album in an , live and natural setting. The fruits of their labours are released this week.

This extended play opens with `Siberia` with bird song and what sounds like children playing in the background. A drum which gave a sound similar to a bodhrán along with an acoustic guitar allows singer Magnus Jacobsen to relay this tale of what appears to be about a relationship that has ended but the narrator still struggles with letting go. There are some delightful dual vocals throughout and backing harmonies and I loved the fact that you could hear the sound of the guitar frets as the fingers drifted over them. It`s a slightly different arrangement to the track on the album which enjoys some orchestrated strings but retains all the intensity of the original.

A brief discussion between the band members takes place before they glide into `Song For The Times` with a tapped drum, shook tambourine and a strummed acoustic guitar. It`s a wonderfully dreamy, melodic, and quite mesmerising version with some captivating dual vocals and  backing harmonies.

The final cut on these sessions is `Weightless Feathers` which opens with Magnus`s vocals and acoustic guitar before Marie joins in and they harmonise magnificently. It becomes almost a lament to a lost love with both singers vocals sharing a quite introspective view.

I read somewhere that SUNDAYS deliver introspective folk with an unfaltering pop sensibility and that`s a fair summation. I must admit that their albums did pass me by but having listened to the three re-worked tracks here, I’ll be keeping a close eye to see how this quartet progress.

I recommend that you do as well.