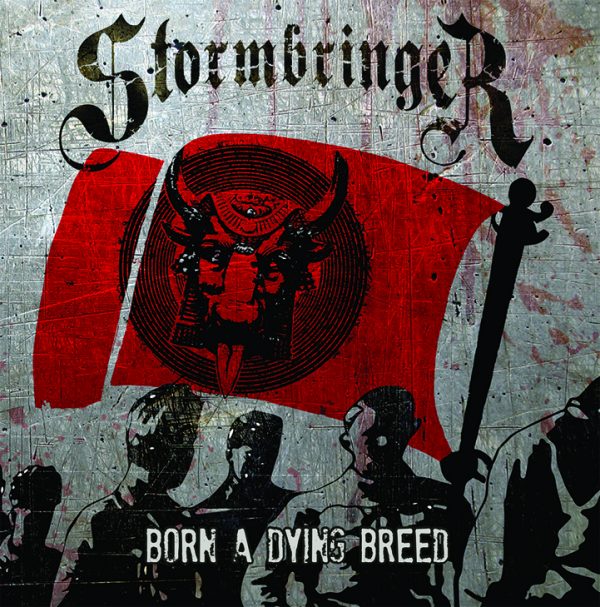 Often, when reviewing albums MV will describe a particular track as “muscular”. It’s a good word to use. It means nothing in the context of music, obviously, but everyone reading the piece will know that the band has a tough sound that doesn’t take any prisoners.

The thing is, “muscular” doesn’t begin to cut it when talking about “Born A Dying Breed”.

It is clear right from the off – “Don’t Trust Me” starts with machine gun drumming for goodness sake – that with their third album, Stormbinger have created something that doesn’t so much want to flex its muscles as destroy everything you own, then return to salt the earth just for kicks.

A heavy rock album in every way, its hooks are huge and the chorus to the opener is insanely catchy, nonetheless it is a rock album that thinks it is a thrash collection.

Like the little kid at school that doesn’t care how big the bully is he still kicks the shit out of him, this has a serious chip on its shoulder.

It also has some seriously good songs too. Like “Bleed For” and “Pay Your Respects” which comes in with a kind of Pantera feel and uses gang backing vocals to great effect. Saying that, this is one gang you’d definitely avoid down a dark alley, thanks very much.

“Through These Eyes” has a glorious Devil may care attitude, and is surely designed to engender a moshpit in some big field somewhere next summer (MV’s first look at the band was at a festival a few years back).

“Let It Begin” lives and dies by its huge bass groove, while “Stick To Your Guns” will strike a chord with all those who remember when Motley Crue were young and as likely to rob you at knifepoint as to put make-up on and chase girls, girls, girls.

The thing about this collection, though, is that it is not a dated affair. It does, though, play resolutely by its own rules. It’s nominal title track proves that. A southern rocker, it casts the five piece very much in the role of gunslingers in the manner that, say fellow East Midlanders Doomsday Outlaw do.

There are no let ups in the late stages either. Where some might run out of steam, not here. “Smother” chugs along as if it has urgent business and has a chorus that Alter Bridge would sell their souls for (if in fact they had one to start with).

And just when you thought things couldn’t get any angrier, “Consequence” doesn’t so much seethe as brood with a malevolence. “Whatever happened to shame” sneers singer Jimi Brown, who like the rest of the band, does a fine job. But he does so in a manner that suggests that he absolutely doesn’t want an answer.

The record ends in the same fashion that it has spent the rest. Absolutely, resolutely and royally pissed off. “Cross my heart, I hope you die,” seems like not just a key line here, but a mission statement for the album.

So, no this ain’t muscular and they aren’t bringing a storm either. Instead Stormbringer are about to reap all kinds of destruction. After watching dullards like Shinedown suck the life out of the genre, you could be forgiven for thinking that the glory days were over. “Born A Dying Breed” is a fabulous example of how good hard rock can still be.

Previous article
Get Down?
Next article
That’s More Life