REVIEW: STOP CALLING ME FRANK – SPIDER IN MY BEER AND OTHER SONGS (2018) 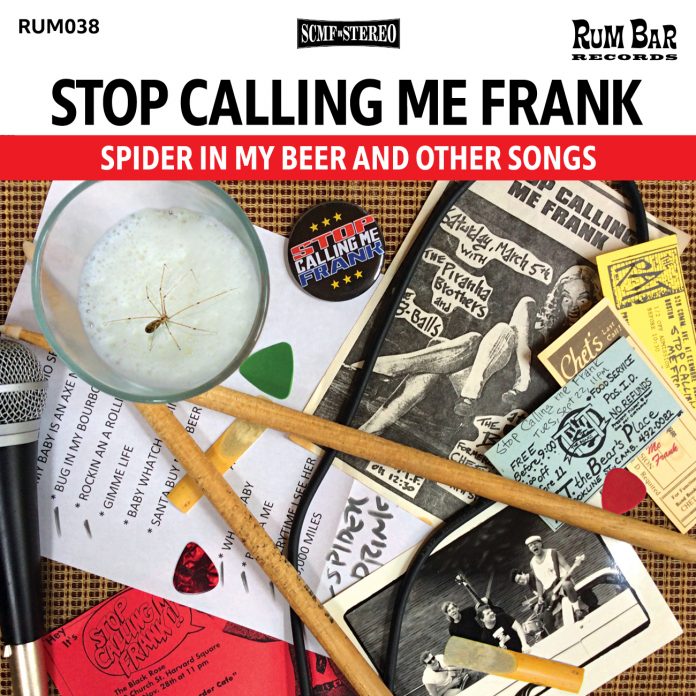 This, apparently, is the first new album from Stop Calling me Frank in 30 years. To be fair, it sounds like they’re delighted to be back.

Barely has the first intro happened – sounding something like The Sonics jamming with a punk band – before the singer is making a noise like a cuckoo, and making the most perfect rock n roll you can imagine.

Somewhere between Barrence Whitfield And The Savages and The Ramones is about as good a summation as I have for “Gimmie Life” (“yeah, I’ve got  two daughters yeah I’ve got a son, and my days of parenting are never ever done” it offers as if to confirm this is a band of mature vintage) but if this one is rooted in reality, you’d guess (hope?) that “My Baby Is An Axe Murderer From The State Of Wisconsin” is written with tongue in cheek. If its not then lord help us all.

Across the first three songs, you might have been firmly convinced that this couldn’t rule anymore than it does. You’d be wrong. You’d be wrong because “Back Of Me” exists. Stones-esque guitar and cowbell is all that needs saying here.

Y’see, these records have sax appeal. That is to say that even before – but most certainly since – a change was made uptown and the big man joined the E. St band, rock n roll is ace when it’s got saxophone on it. This has. All over it. Brilliant it is too. “Every Time I See Her” – which also has a superb guitar solo – is as Motown as it is punk. And it’s not the only one either.

“Baby Watcha Hiding” – another that you hope isn’t real – is the rock n roll that those of us who live in England think is the sound of vintage middle America. Diners, Drive Thru movies and The Grease Soundtrack, while “Bug In My Bourbon” maybe has a touch of The Jim Jones Revue about it.

“Beat That Dog” is all 50s do-wop. The Stray Cats and all that, while there is something of The Sun Studios about “Rockin And Rollin’” which casts them in the bowling alley. Not for nothing, do you suspect, does it contain the line “I don’t care what all the other guys like.” Maybe you don’t want to look to far into this, but it does feel that there is scant regard for trends throughout “….Other Songs” that is glorious.

“Drinking After Work” sees them let their hair down over some Beach Boys harmony vocals, “Know Nobody” with its strident drum pattern is as blue collar as Tom Petty, “5000 Miles” is almost bluesy, while there is nothing else to call “Whale Baby” than a freak out that Little Richard would be proud of. Even down to the best stop/start bit this side of “Shout” by Lulu.

The phrase “full of beans” was made for these 13 songs in honesty. It has a childlike ebullience – maybe they’re just happy to be out of the house, I dunno. Whatever the reason for it, “Spider In My Beer And Other Songs” is absolutely glorious.

Previous article
BAND OF THE DAY: BIZOU
Next article
SABATON COME ROARING BACK