REVIEW: STONEWALL NOISE ORCHESTRA – THE MACHINE, THE DEVIL, THE DOPE (2016) 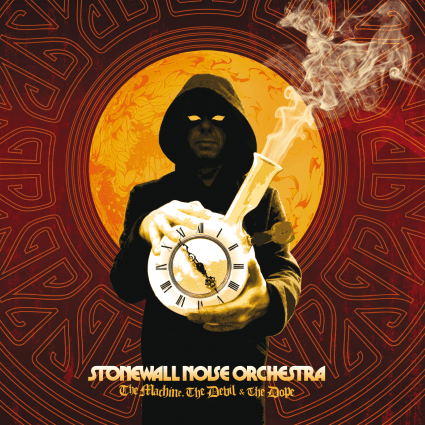 Since forming in 2004, Stonewall Noise Orchestra – who win the award for the second best band name this year, the winners, face facts, are Jesus Chrysler Supercar – have released four albums. For number five, their major label debut for SPV, by their own admission the Swedes pleased themselves first.

In an article printed on these very pages, founder member Snicken put it like this: “I have to admit that our new record is based on a – let’s call it healthy – dose of egotism; we composed the songs exclusively under the aspect of what we ourselves enjoy most live on stage,” he said: “We wanted to make a straightforward heavy rock album and that’s what it is. Sometimes that’s exactly what you need to stay sane in a world that’s getting crazier by the day. It’s 40 minutes of rock therapy.”

On so many levels he’s bang right, but this album is actually much more. In fact, it’s like they’ve taken everything from hard rock for the last close on five decades, sprinkled it with something of their own and made something extremely tasty indeed.

So it is that after a thudding bass groove – and there’s never been a bad song that’s started with a bass groove – “The Fever” sounds like an Ozzy solo song, with its confident chorus suggesting that you’ll be in love with the noise. It’s not wrong –  while “Welcome Home” races round like an out of control rollercoaster and still manages to harness “Minus Celsius” era Backyard Babies just for grins.

This is largely muscular stuff. “Into The Fire” boasts a huge, swaggering “look at me” type groove, and nothing here is scared of its own shadow. “Don’t Blame The Demons” which comes on like a Scandinavian version of Corrosion Of Conform it is magnificent, “Superior #1” slams like it really wants to make a mark and “Stone Crazy” would usually just be the standard woman done me wrong type tale were it not done so well.

As if to highlight that this really was the type of record when anything could be tried, there’s even an epic feeling cut, as “I, Servant” takes its sweet time to be magical, and if its not really the right environment for balladry, then “On A Program” is a welcome change of pace.

On the aforementioned article, Snicken said he was most proud of the song “The Machine, The Devil, The Dope” itself, and certainly the title track, which ends things here, swings like a wrecking ball and does plenty of damage – as well as giving this marvellous record a fitting conclusion.

So they’ve made a record for themselves that everyone will end up enjoying. And that kids, is why you should always be selfish. The S.N.O Men said so.