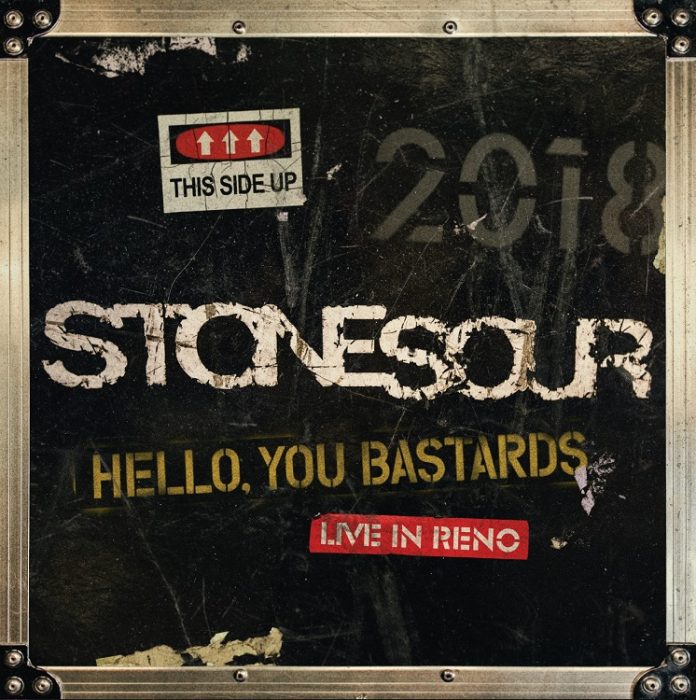 Stone Sour play “Bother” about halfway through “Hello, You Bastards: Live In Reno”, and as they do, Corey Taylor says: “for a lot of people, this was the very first taste of Stone Sour”, he’s not wrong. I got a text from my mate one morning at work, and it said: “And, you heard Corey Taylor’s new band’s single?” (I know…..) “check it out.”

There are two staggering things about this – the first I hadn’t realised until I was making notes to review this live offering. That was over 17 years ago. What the hell? How did that happen? The second is rather less factual, but nonetheless I stick by it: in that period, there’s been no band who has a better body of work than Stone Sour (Black Star Riders come close….and yeah I know…..)

What is more, “….Reno” is basically the proof that Taylor’s pre-Slipknot mob, now containing Christian Martucci, who doubles up in BSR these days (told you I knew) are as good as there is.

The best thing about this though – oddly perhaps – isn’t the songs. Nope. It’s the fact it sounds like its live.

I love “Live And Dangerous”, for example, but the bootlegs I own of Thin Lizzy are better. This has the same raw feel. When I read Taylor saying “there are no overdubs, this is the full show and its exactly as it went down” I rolled my eyes and internally went “yeah, ok Corey”, one listen to the brilliant opener “Taipei Person Allah Tea” and you know he ain’t lying. “Warts and all”? That’s a cliché. “Live and real?” that’ll do.

This being a 2017 show, not unreasonably, there are a good number from the “Hydrograd” record that had come out that year, “Knievel Has Landed” rather neatly shows the modernity of its grooves, and “Whiplash Pants” does likewise, and if I may be so bold, shows the other US arena rockers how to do this shit.

Older stuff, “Absolute Zero”, “30-30-150” and the wonderful “Get Inside” and a brilliantly unhinged “Reborn” chief amongst it, has stood up incredibly well, and that they do “Song #3” straight after the latter rather underlines that. And it comes through with crystalline clarity that the band believe this too.

It is interesting – to me anyway – that they end the main set here with “Through Glass”. The song has always resonated with me (and not just because CC. Deville is on the video…..).Rather, at the end of the last decade me and the aforementioned mate made a playlist of the songs of the previous ten years. That one made mine.

The encore, “Made Of Scars” and “Fabuless” is mighty, of course, but think on this: you can tell a band’s quality from the ones they don’t play. This set doesn’t include “Digital (Did You Tell)” , “Say You’ll Haunt Me” or “House Of Gold And Bones” – all of which would be the last song in the encore for nearly any of their modern peers.

Stone Sour are a brilliant band. “Hello You Bastards: Live In Reno” is a brilliant live record. The emphasis on the word “live” is all-important.