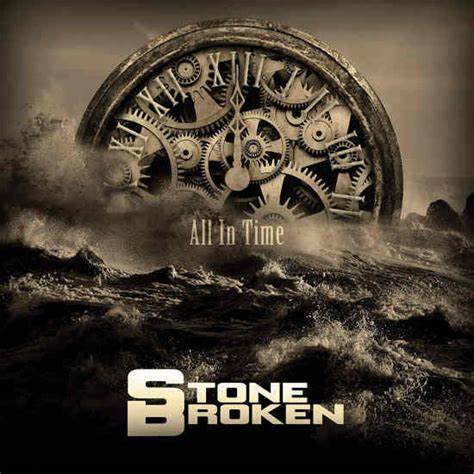 I am very often wrong. In football I confidently – and loudly – suggested that Harry Kane was “shit” and a “one season wonder” (I based this on one game I saw him play against my beloved Stoke City, of which more in a minute).

In music, Muse were not “a band no one will ever see again” as I offered, at the top of my voice when I saw them support Feeder, way back – although given that I also said they were “absolute bollocks” too, I maintain I am half right.

The point is that at the time, you aren’t always right.

However, on December 18th 2015 I went to see a band play a more or less hometown gig, they were about to launch their first album. And we said in the live review that the “Record is brilliant. And we don’t just mean it’s good, we mean it’s good enough to move them onto the next level.”

That band was Stone Broken. And the album I was wittering about was “All In Time”. Four years on, they sell out the same venues they used to watch gigs in, they’ve toured the world, they’re on Planet Rock more than Darren Reddick, and they are one of the hottest bands in the UK.

Which is why this album being reissued matters. Yeah they’ve tagged some bonus stuff on – its not essential in honesty although the 2019 recording of the ballad “Wait For You” with the orchestra that no doubt they dreamed of putting on the album originally but couldn’t is beautiful  – but what matters is getting this record heard.

On the last line of my review at the time I wrote this: “They say people don’t write them like this anymore. This lot smile knowingly and have an album full of them. Stone Broken have come up with a stone cold classic.”

And I’ll stick by that. It is now a classic that everyone who has seen them play these songs live since can get too. I don’t intend reviewing the record again, my original thoughts are still valid and are here, but listening to it again as I have this week, and of course with the benefit of hindsight, I am struck by the stoicism within. I remarked on the gig review that there was a “quiet confidence” about the performance. Now listening to songs like “This Life”, with its chorus of “I am not gonna waste this life” it is tempting to suggest that they always knew, always knew this was going to change theirs. Maybe they did, maybe they didn’t, and maybe its all about hindsight.

“Another Day” to pick one out, sounds more like Pearl Jam than I remembered, while “Not Your Enemy”, “Better” and “Stay All Night” are all the sort of rock that wants – no, make that deserves, to fill arenas.

Back to football – sorry, but there’s a point here. Everyone who supports a team that isn’t the best, knows the feeling of “he’s too good for us.” When you’ve got a player who is so much better than the rest of the squad. We had a player called Steven N’Zonzi. He should never have played for us. He ended up winning the world cup.

That’s how I felt about Stone Broken back then. They were too good to be in that local scene. So, just glory in the one that put them up into the big leagues, because it is still fabulous.