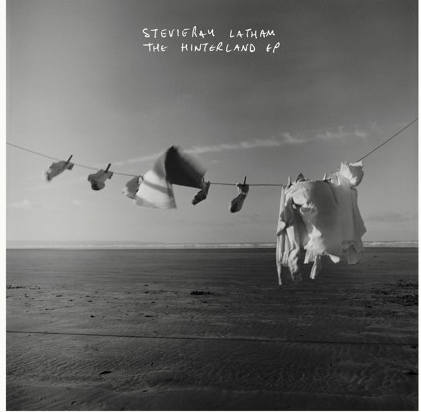 StevieRay Latham is a singer-songwriter and musician whose music is tinged with elements of folk, blues, garage rock and ambient sound-art experimentations. He grew up surfing in the South West before moving to London to study Fine Art in 2011 where he first started performing live in folk clubs across the city. His latest EP `Hinterland` is released this month.

This four track extended play opens with `Let Me Inside` which explores a relationship between two people with opposing desires. It`s a stripped back affair with a strummed acoustic guitar and vocals and seems fairly introspective. There are some vocal harmonies shared throughout and synth keys that join in on this folky maybe Americana tinged composition. The last minute has an ambient instrumental  soundscape. A strummed acoustic guitar leads us into `Old Friends` which I read is a song about loss and trying to find acceptance. It has a deeply reflective almost mesmeric feel that is enlarged when an organ like sound joins halfway through but takes nothing away from the emotive vocal delivery. A kind off bitter sweet reflective nostalgic reminiscence.

It was stated that `Fugitive` would lyrically sweep the listener into an allegorical world of existential psychodrama and substance abuse. It does veer that way as it describes a surreal journey in a quite illustrative visual form with a folky upbeat vibe with some shimmering light synth tinges sprinkled throughout adding to its overall ambience. This release closes out with `No Way Out` a meditative, contemplative track that is maybe a little dark but reflects the lyrical content that can be interpreted in a number of ways.

`Hinterland` is a thoughtful quite reflective offering which has some folk and Americana nuances and lyrics that you can read what you want into . The singer has an appealing slight inflection or timbre in his voice which draws you in and gives it a kind of unique touch.