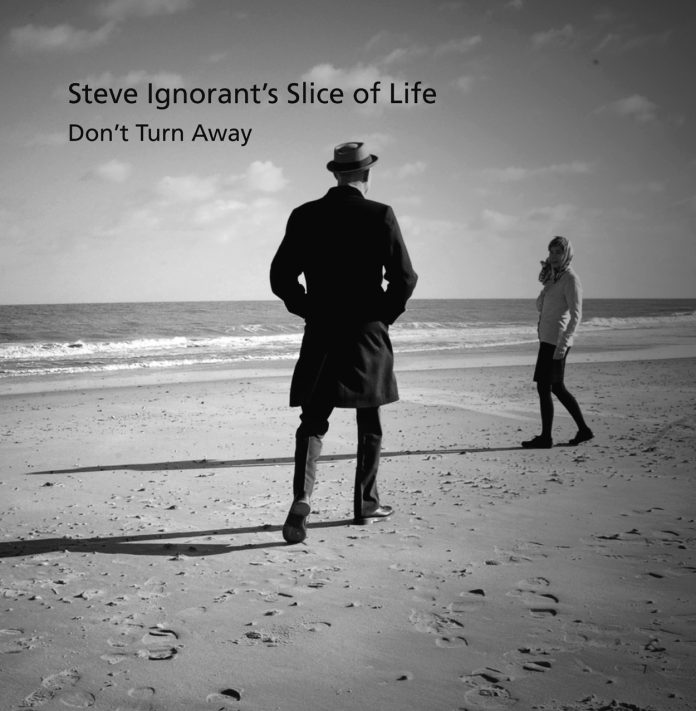 ‘Don’t Turn Away’ is Steve Ignorant’s Slice Of Life`s follow up to their 2014 debut ‘Love And A Lamp-post’ He has almost discarded the punk noise that defined Crass, but Slice of Life retains the emotional impact and compassion that has long distinguished Steve’s work. It`s always a little difficult as to how to approach the work of somebody who is so politically and socially driven and if you will end up interpreting incorrectly what they are trying to communicate but then I think, well if I’ve misconstrued something, at least I’ve absorbed it and come to my own assumptions. At my initial listen I thought, my god the first few tracks are a bit melancholy, but this is an offering that needs a few plays and is a real grower.

`Don’t Turn Away` begins with Steve talking his dog for a walk and offloading what he feels are the issues of today and why, if we don`t address them, we become complicit. It feels like a veiled attack on the government of the day, whomever they may be and as it progresses to a climax you can almost feel the hurt and despondency in the narrator`s voice and virtually a resignation of their inability to challenge. It does end however on a reflection that this situation will end and he`ll be there to reflect on it with a knowing contemplative smile. The track is simple but so effective with just a piano, Steve`s voice and some nice backing vocals / harmonies. When asked about `Your Day Will Come` the response was “Something you should know bully-boys and ‘ladies’” speaks for itself. Indeed, it does, and the tune has a jazzier feel with again angst-ridden lyrics attacking those who prey on the vulnerable. The chorus of “you`re day will come” I did find subtly threatening. `The Right Way` has almost a tune that could come from a jewellery box running through the length of it. The words seem to be a form of self-analysis. A type of challenge as to not allowing anybody to get too close and the raconteur appreciating that they may indeed be unsocial, indignant and unhappy and locked in their own little solitary world.

The next offering `S.A.D.` is a song about depression, despair and loss. The underlying tune allows a platform for the thoughtful lyrics. “We need to keep talking about this and hopefully by sharing our experiences people will know that they are not alone” is what the artist offered when asked to comment.

`Slaughterhouse` is not quite an anti-religion song but anti organised worship of a creed or divinity, good or evil and states that the storyteller is open to support causes that they feel can be justified. The tale is related over a tune with a nice bass line, guitar and piano melody that`s almost hymn like, which seems a nice irony.

A song full of thoughtful anti authority assessments and how corporate power corrupts is shared with `The Story Continues` which plays out to almost a gospel tune with the piano twinkling and harmonic backing vocals. The viola really adds to the disconsolate but thought-provoking lyrics. An alternate view of the American dream. `Song For Myself` is quite an introspective look at the narrator`s own personality and actions, maybe considering their own motivations. The music is almost a mirror image of the lyrics, which go from forlorn, to joyful and back to mournful.

`Diffrability` celebrates our individualities. Steve when asked has stated “I’m proud that I’m different. Glad I’m not so uniform. Proud that I’m Ignorant. Glad that I’m not of your norm.” There isn`t much more to add apart from to say that it was about the most uplifting cut on the album and had some wonderful harmonies of “do do dooh`s” which I ended up singing for the rest of the day.

`Stretford Blue` (new mix) seems to relate to someone who is or maybe has previously been capable of        conduct or speech inciting people to rebel against authority but now just keeps to themselves but is sickened by the sight of perceived rebels, going through the motions for wealth. The chorus of “It`s Just another`s” were reminiscent to the Stone`s `Give Me Shelter` chorus.

I loved the penultimate track `Good Intentions` not only for it`s rock and roll / rockabilly vibe but it`s lyrics which seem in response to the more dangerous aspects of the Me-Too Movement and the celebrity sexual abuse allegations. This is what I admire about Mr Ignorant, he`s prepared to say what people think but are too afraid to voice. The album closes out with `Whistle Down The Wind` quite an unsettling piece to close on with its recurrent piano chiming and choral suggestions with distant whistling adding to the unsettling atmosphere. The lyrics seem to be a reaffirmation of the narrators` desire to continue to fight for what they feel is right.

When I first listened to this release, I have to say I was almost dismissive but having taken the time to absorb it, I found it really gets into your subconscious. Mr Ignorant`s London accent / dialect, delivery and lyrical content are the essence of what is so good about this offering but the other members of SOL flesh it out with the two Pete`s, Pete Wilson (guitar) and Pete Rawlinson (bass) but what a find in Carol Hodge (piano). The whole piece is complete with these gifted musicians, almost a yin and yang effect.

The album is about the ups and downs of life, aging and the struggle to endure. Steve Ignorant has always fought for the oppressed in life and this reaffirms that this will continue. A thought-provoking album and one I’d encourage you to attain.