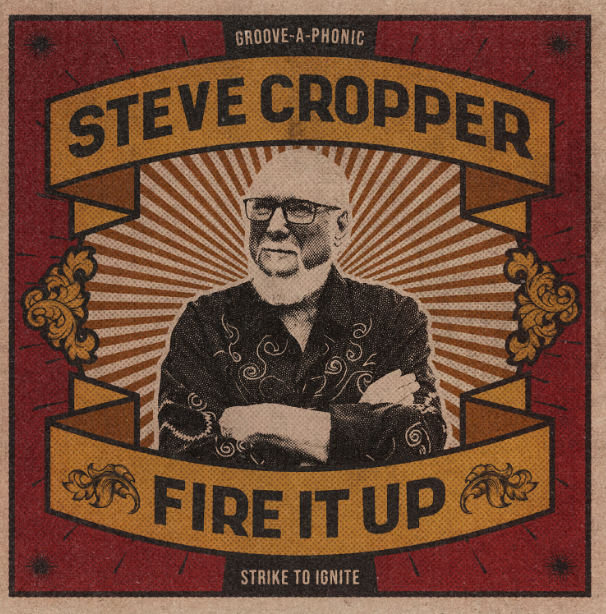 Steve Cropper reckons “Fire It Up” is his first “proper solo record since 1969”.

To be fair to him, he’s been busy.

I am never sure whether to blag these things or to tell the truth, but sod it. I’ll admit it. I hadn’t heard of him before this record landed with me a few weeks ago.

I’d put a press release or two on the site – but I put that many on a day that if you think I read them, you have another thing coming.

Anyway, to get to the point, I put the record on late one night and listening, as I do I thought “good grief, this is good.” All kinds of words are going through my head like “class”, “muscle shoals”, “soul”, “Southside Johnny”.

The last two are important, given, the venerable Mr. Lyon is a hero of mine. And that sound, that rock n roll with a horn section, a damn good time with a hint of the blues, remains a staple of mine.

So I’ve listened to the first full song on “Fire It Up” – the title track – and there’s a glorious line about getting to a certain age, lets say, and finding a relationship with a woman with a “past”: “I know there’s been some others,”  rasps singer Roger C. Reale, “some business under covers”. Right, cool. Lets Google this fella and see where he’s been for 52 years.

Now, if you’ve got this far, you know who Steve Cropper is, you know he was a founder member of Booker T and The MG’s, you know he played on “Midnight Hour” by Wilson Pickett, “(Sittin’ On) The Dock of the Bay” by Otis Redding, “Soul Man” and “Hold On I’m Coming” by Sam and Dave. He plays on John Lennon’s Rock N Roll album.

And I am sorry, because it seems that Cropper – who produces this and modestly says he “sets the beat” is something of a genius, because you don’t write the laid back soul of “One Good Turn” unless you are. There’s something deeply contented about it, as if this is a man, a band, that is entirely comfortable in its own skin.

“I’m Not Having It”, has just a touch of Robin Trower about it, but its got that soul too, the fact that it could have been on the soundtrack to a Tarantino film, its got a real sass (and sax).

The organ on “Out Of Luck” is what makes it. And its noticeable that whilst (self-evidently) Cropper is an incredible guitarist, what he is not is the centre of attention. It’s the subtleties that get you, so it is that while “Far Away” opines at the chaos of 2021, then it does so with a real cheery, southern sound, or that “She’s So Fine” is a only concerned with fun, but they all have a gravitas. It’s effortless.

It also has no interest in trends. Frankly “Two Wrongs” could have come out at any point since The Beatles went on Ed Sullivan and sounded fresh, or “Two Way Street”, for that matter, would have sounded ace on an Otis Redding compilation.

A real clever facet of the album is that it is rooted in classicism in terms of the music, but the lyrics are very “2021”. “The Go Getter Is Gone” deals with mental illness, one of a few that find something “current” to say as it were.

“Bush Hog” – a three part instrumental which bookends the album, is built around its bass groove – takes it’s time, but goodness me, the guitar work is so understated but so, so good.

That would sum up the album, except for this. On that first listen I’d made a mental note: This could have been on the Blues Brothers film, I thought. I’d watched it as a lad, with my parents (my dad had cheerily explained that if I was ever to repeat the language in his house, there’d be issues) and loved it. I’d got the soundtrack out of the library the following week on one of mine and my dads Thursday night trips there.

The punchline? Well, yeah, you all know. Steve Cropper was one of the musicians in the band. “Fire It Up” proves that he’s still got it. He’s still incredible and me? I don’t have a clue. I do love this though.