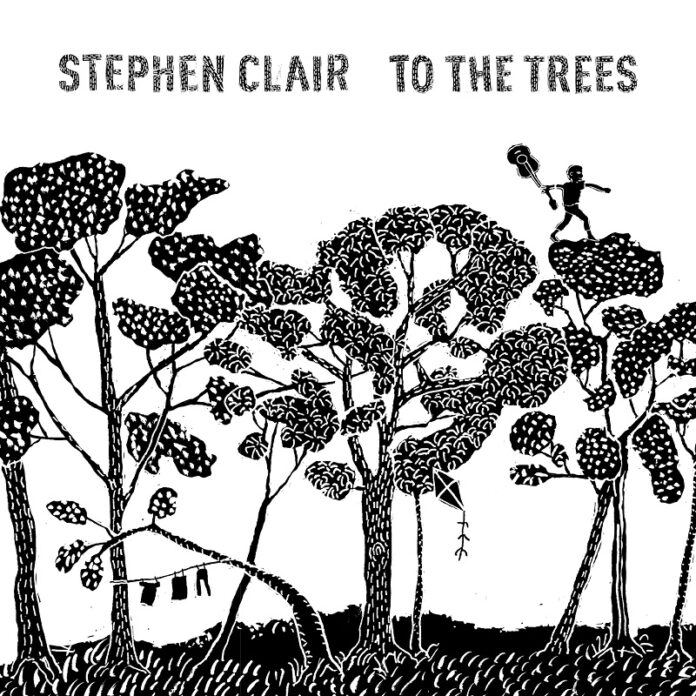 ‘To The Trees’ is Stephen Clair`s ninth album and is according to this singer songwriter “about embracing, maybe even shepherding, change, even when it’s rough going; accepting the new and getting over one’s self”. Stephen has shared that inspiration came through books read by authors such as Samuel Beckett, Dorothy Parker & E.B. White.

The album opens with `Worthless Treasure` which has a delightfully sixties almost retro feel. The kind of number that I wouldn`t have been surprised if they told me that Phil Spector produced it as it almost has that “wall of sound” texture. There`s a charmingly dreamy ambience about the oddly titled `Lousy Butterfly`. It has twinkling piano keys, an understated bassline, a shuffling brushed drum beat and vocals sprinkled atop.

Title track `To The Trees` is a quite off kilter, off beat offering with some bizarre lyrics and had a sort of Beatles-esque psychedelic flavour about it and even a brief ragtime piano solo in the concluding section. Oddly captivating. We have some brass tinges and complementary harmonies thrown in on the chugging `Let It Out`. A sort of uplifting cathartic sing a long of sorts.

`Not You` is a kind of bar room jazzy blues composition that strolls along. A number that the sadly missed Dr John, i`m sure would have been happy to include in his set list. There`s a sweet, dreamy, skewed guitar chord riff intro to and throughout `Vacation Back Home` a gentle quite reflective nigh on Summery number that kind of delivers what the title says.

`The World Turns` is another introspective piece with some piano keys and a constant drum roll / beat that leads us through this thoughtful musing. We have a short personal contemplation in `About My Body` which is strengthened from the stripped back deployment of a strummed acoustic guitar and vocals.

`Cry` is a fairly rootsy bluesy number that seems to drift along but really sucks you in without you fully realising it. We have another reflective narration with `I Hope We Make It Here` which is almost spoken word over a soulful musical backdrop with some wistful saxophone tinges .

`Make A Bed` is a more Americana tinged commentary on how the storyteller feels and a little as to how it effects those around them. The shook tambourine was pretty simple but added so much. The album closes out with `A Human Echo` another reflective piece that relates to a long term friendship which has a tapping noise, either from hitting a guitar body or drum rim leading us along and a strummed guitar. In the latter part there seemed to be a violin or some kind of stringed arrangement that joined intermittingly.

I read that ‘To The Trees’ was a collaborative affair, recorded with The Restless Age (drummer Lee Falco, keyboardist Will Bryant and bassist Brandon Morrison) with the addition of Brad Hubbard (baritone sax) and Jeff Fairbanks (trombone). The album is what I’d call a grower and the more you play it, the more it will bleed into your soul. The tracks are of a kind of personal nature and reflections on life. It`s a little different maybe gentler than his previous releases but still delightfully enchanting