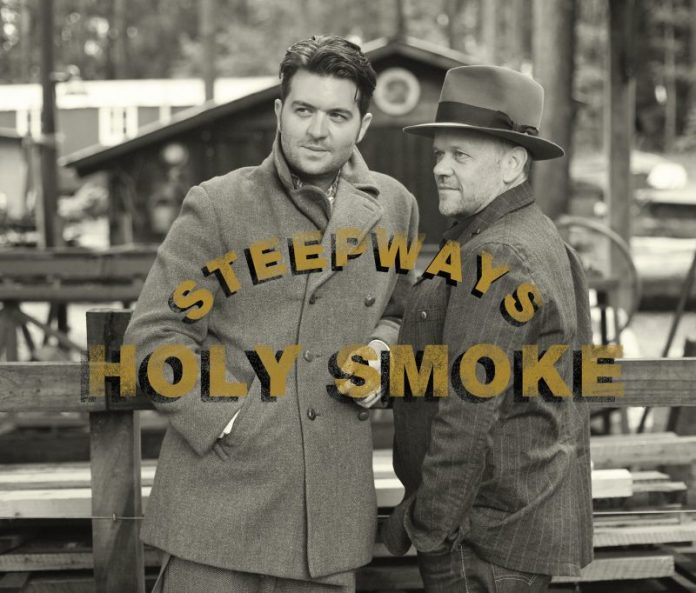 A meeting in the pub leads to some thrilling Americana

That is the fact, but to understand its sound, you arguably have to go back to their genesis and like most good ideas blokes have, this one began in the pub.

The driving force behind it –   Blair Chadwick and Charlie Bateson –  were looking to form separate bands, before rehearsing the tunes that would eventually become “….Smoke” with renowned Producer Chris Clarke.

Ok, such luck, happenstance, karma, whatever, happens to a lot of artists. What makes Chadwick and Bateson – and therefore Steepways – different is that they then surrounded themselves with some incredible talent to flesh out the songs.

The pair were joined by drummer Jamie Shaw ex-Dan Raza and the Shrouds, current Hallelujah Trails) pedal steel and dobro legend Darren Buddell, (Atlantic Sons), Andy Fairclough on Hammond organ, Wurlitzer piano and keyboards (ex-Secret Affair and current Danny and the Champions of the World) and Siobhan Parr (former Alabama 3 and current Siobhan Parr Trio) on vocals along with the aforementioned Chris Clarke on bass. It is quite a cast.

Of course, such a line up is all very well, but as anyone who supports a football team who’s record signing can’t get into the side (this may or not be the case with the team that MV loves…..)  knows, it ain’t always about the talent, it’s about the blend, and here “Holy Smoke” really scores, because it is stunning.

If Ryan Adams was from London, or at a push Whiskeytown had possessed just a little more grit, then this is a record he and they could have very well made.

Exceptionally well crafted, the record begins with a pedal steel riff, but the vocal styles and delivery of “Everything Won’t Do” is resolutely British, and as an example of the two worlds that Steepways straddle, it is just about perfect.

“Radio Silence” on the other hand has a mournful touch about it, and there is a folky feel to the acerbic “Bystander”, which tells its story wonderfully.

“Hannah Lee” is something that Shooter Jennings – never mind his dad – would be proud of and its odd harmonies make this something of a gem, while “Echoes” has a shard of the West Coast sunshine about it, and is proudly rooted in that classic 1970s sound.

A record with a dark side just waiting to be uncovered, you suspected, “Ghost Walks” betrays some real longing, but there is a real sense of fun in “Lay It On Me” and “The Collector” which is elevated by its fine piano work.

The thought that this has merely wanted to get in some mid-west honky tonk all along was bubbling just below the surface throughout, but finally it makes its intentions clear on the brilliant pair of “Chaperone” and “Rather Be Alone”, the latter of which adds a kind of bluegrass tinge with Parr to the fore with her fine vocal work.

Things end in bleak, but classy, fashion with “Dying On The Vine” which is a mighty fine way to end a mighty fine collection, as it does so in the manner of world weary troubadours in the classic mould.

British Americana doesn’t get much better than this, and the band who met in the boozer should drink to that.