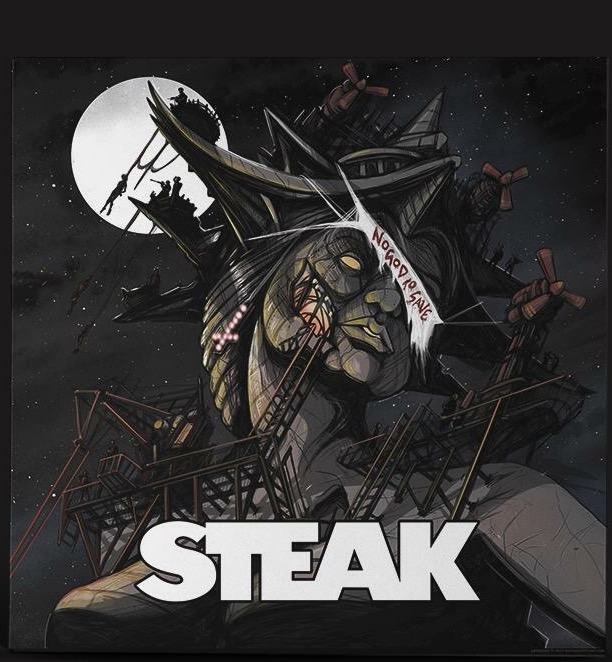 From the murky deserts or London….

There are some bands who profess a love for the underground when you know deep down they’d sell their soul quicker than Robert Johnson at the crossroads to get a taste of stardom.

Four reprobates from London, one of them – Reece Tee – is one of the founders of the legendary Desertfest. And in the nicest possible way, you cannot imagine them in any other setting.

Which is why releasing “No God To Save” on Ripple Music makes such perfect sense. There is no better record label for them or this sound and rarely can there be a better fit.

But, whatever they are, whatever the ethos, and however much the stars have aligned, they’ve got to  have the right album to back it up. There’s no worries on that score. “….Save” is little short of magnificent.

Opening with the lengthy “Overthrow”, its first two minutes are just an excuse for a dirty, fuzzy riff. Steak might have all the hallmarks of those dry as dust Californian bands that Ripple often deal in, but there is a very British grit here too.

“Coke Dick” is a touch slower, starts off with a little more doom perhaps, but like many of the others here, it slams when it chooses – but it would surely make perfect sense in some grimy club on a drunken Friday night.

Happy too, to move itself into more psych tinged areas, as it does skilfully on “Clones”, “No God To Save” understands the need for light and shade. “King Lizard” broods for example. That said, you do get the feeling that Steak are happier when the hair and the sweat is flying – “Living Like A Rat” is a case in point.

A gleeful stop off at every point along the dirty rock n roll route, “Mountain” recalls MV faves (and Steak’s label mates) Stone Axe, while “Rough House” is slower and a more crushing and “Crusher” maintains that slightly unsettling vibe.

A record with frequent surprises, “No Good To Save” ends with a couple that show a different side to the band. “Wickerman” adds a gentle, shimmering melody, but does so all the while with the air of something that would quite like to smash your face with a broken bottle, and “The Ebb” an acoustic, bluesy instrumental that finishes things, allows everyone the chance to pause for reflection.

It concludes an absolutely superb collection. One which twists and turns, but always maintains a riff based heart. On their Bandcamp page it says this: “Steak. Because meat is meat and a man’s gotta eat.” Just gorge yourself on this. There’s enough here to make that annoying bloke on Man Vs Food full.