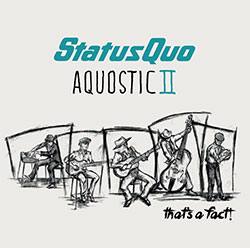 For a band like Status Quo, an institution in the rock n roll world for nearly 50 years, the temptation to just do the odd tour and play the hits must be overwhelming.  Surely a band with more hits than a Manny Pacquiao fight has nothing left to prove and can take it easy as the roll along into retirement.  Many bands have certainly chosen that avenue to walk down but that’s not what Quo are about.

Messrs Rossi, Parfitt & Co enjoyed their first foray into the acoustic world so much they have done it again.  I suppose if it works then why change it and they have a fair number of tracks in their back catalogue to rework.  Essentially if you liked the first Aquostic album you will like this one.  In truth there are some hit and miss moments but it is mainly a new and interesting take on their classics which proves that behind the jeans, t-shirts and long hair there lies truly gifted and original musicianship and songwriting.

The title track “That’s A Fact!” is the album opener and its a funky and flighty number that enforces the playful side of the band.  It won’t make a greatest hits album but that’s not really the point of this album.  Hit singles are a thing of the past and no longer worth the paper they were written on in the post-millennium music world.

“Roll Over Lay Down” is a slow and rhythmic strut that loses the bombast of the original but maintains it’s infectious beat and bar-room groove.  Likewise “Hold You Back” keeps its roots but branches out into an accordion led symphony of  folk-rock.

Not every track works as well in the bare bones fashion as their original versions.  “Dear John” for example loses the charm of the original and is a mournful and slow number incorporating strings.  It’s certainly different, and the band should not be criticised for trying something new, however, it can’t work every time and this is one of those rare occasions where it was best left alone.

The odd misstep should not detract from the excellent re-workings on offer throughout the album as “Backwater”, “Belavista Man” and “Mess Of The Blues” are fine examples of giving a fresh take on established classics.  The brilliant Beatles-esque “Ice In The Sun” is standout track and is given a new lease of life here.

Status Quo continue to defy critics and keep their legions of fans stocked with new music when other bands of their vintage or either long gone or just happy to keep hanging onto the thin thread of their glory days.  Quo have not only survived the shifts of musical fads and fashions over the decades but they have continued to thrive.  They should be celebrated as arguably Britain’s finest Rock n Roll band.