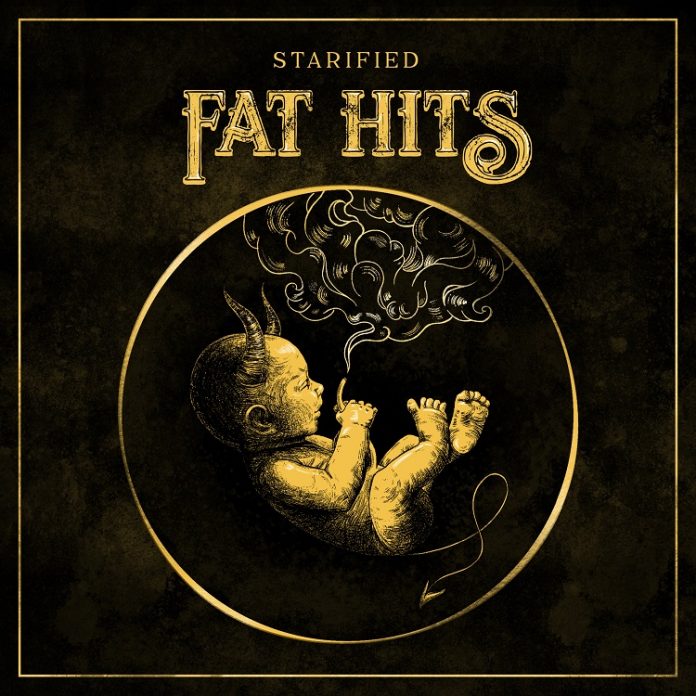 The clues, really, are there that this isn’t your usual rocker.

“Fat Hits” is the third album from Starified, but that is immaterial.

What you actually need to know about them is you probably won’t hear a record this downright odd for the rest of the year.

Look, it starts easy enough. Massive, meaty fat grooves that would get Ben Ward and the Goblin lads salivating and a chorus to “Scapegoat” that doesn’t half have an early AIC thing going on.

That alone means this is getting reviewed.

But, well, then “Don Loco” happens, which is so mad it makes Turbowolf look sane – and whilst I can’t be certain, its first line appears to be “my dog has got black magic”. Ok, now we are getting somewhere, voodoo pooches. Crack on.

“Fat Kids” is even better. You see, it swaggers. It swings its big balls just for a grin. There’s something about playgrounds, sandboxes, junk food, and being rockers. And fat kids. Lots of fat kids and a proper metal solo that might be the best thing I’ve heard all week.

To be honest, I don’t have a clue what’s going on, except for one thing: I really, really like it and I want to be part of Starified’s world.

The three piece (they used to be a five piece apparently, but they lost two members before they recorded album number two in 2018) get even more quirky when you factor in they are from Moscow, and also that singer Vadim Ambartsumian also plays the drums. Well if its good enough for Phil Collins……

See, I don’t know whether these boys hurry love and I am scared to think what they felt coming in the air tonight, but I am certain that “Anti Rebel”, with all its confidence is about as good as it gets, and what’s more, it doesn’t sound like anything else you’ll hear. There are prog bands who don’t get through as much in 20 minutes as the trio do in about four.

“Saraton” built around the bass of Dmitri Shurpakov and gets kind of psychedelic for reasons I can’t really fathom, and the more I thought about it the less clear it became, “Wider Lane” would, in other circles, be called “alt-rock” but you do feel that Starified would relish smashing the crap out of skinny jeans wearing kids, and “What If” gets proper heavy, just because.

And as much as “just because” more or less sums up the album, there’s a real craft here, a real “anything goes” feel, but with the skill to pull it off and how on earth guitarist Yuriy Berezovik does it I don’t even want to know, just know that he does. His riffing is never better than on “Pick A Fight” (don’t bother, you’d lose) and even the more Biffy Clyro-esque flavours of “Noah” pack a real punch.

“Same Old River” would – in better times – fill stadiums with its sound and the way it moves this way and that is almost the album in microcosm.

Over 30 years ago now, I heard a band that opened my eyes and ears to the fact that boundaries were other people’s problem. I love Faith No More to this day, and there’s a similar spirit – if not sound – at play here. Starified are the sort of band you could see at a festival and make your band of the day.

Whatever else it is, one thing about this is simple:“Fat Hits” is brilliant.