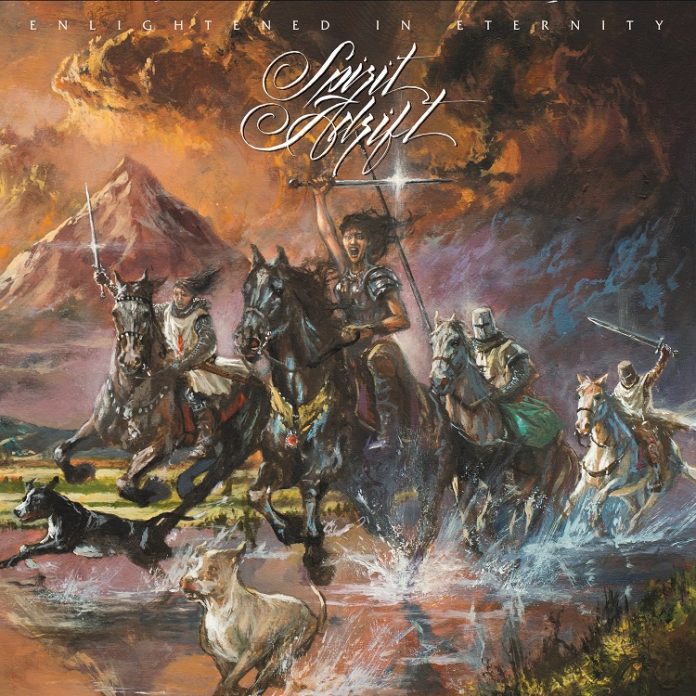 There are few ways to get me listening to your band quicker than to get yourself on a bill supporting Corrosion Of Conformity, and furthermore to announce a gig with them playing about five miles from my house.

Back in May this year, you know, before a pandemic and everything, I should have been watching Spirit Adrift open for Pepper and the chaps, too.

Now, whether I should have known about SA – who started as a solo vehicle for Nate Garrett – before this, we can argue about all day. Far better instead to say I am on board now, and “Enlightened In Eternity” is a stunning record.

Nate and his mate, as it were, Marcus Bryant on drums, play heavy metal – you can tell that by the record cover, which is so metal that Hammerfall would blush. Except they don’t. “Ride Into The Light” is a decent underlining of that, too. Because this is equal parts “stoner” (an utterly nonsense phrase if ever there was one, surely) and groove laden like the aforementioned CoC, then, at a moments notice, it pops off down some Judas Priest-ish full on headbanger thing.

Check out the double kick drumming on “….Light” or the gallop. That then ensues, or the bit where it just changes tack altogether and Garrett (who plays all the other instruments here) sings “in victory, its clear to me…..” in the most bombastic style this side of Iced Earth.

The point is, Spirit Adrift care not a jot for your boxes or preconceptions. They are off in the galaxy, far, far away doing their own thing. “Astral Levitation” – which has a kind of Dio vibe – proves why, largely too. “There is nowhere that can’t be seen, if you let yourself be free,” sings Garrett, and really, that is all over this record as it goes where it wants.

“Cosmic Conquest” which belies its title with a bass groove that has real urgency, and just a hint of early Maiden in the guitar work, or the more hard rock “Screaming From Beyond” are both from the very top draw, and you can only marvel at the work of Garrett. He is, surely, one of the best guitarists in modern metal, such is the way he switches from riffs to soaring solos.

“Harmony Of Spheres” is a case in point. Starting as an almost thrash metal record too. Something that Testament might have done on one of their recent albums, the vocals take it to somewhere floating, kind of dreamy and ephemeral.

“Battle High” strides the land like a monolith. Orange Goblin fans get on this one immediately, and “Stronger Than Your Pain” has something unsettling about it. It is though, just another piece of brilliance on a record full of them.

The last one, though, “Reunited In The Void” is perhaps the one the band enjoyed the most. Glorious, labyrinthine, exploring, Sabbath one minute and some prog thing the next, its near 11 minutes is a vehicle for a closing instrumental passage that is one of the finest you will hear.

And “Enlightened In Eternity” is that type of record. One of the best “metal” records of 2020 despite the fact it Is totally unconventional. Originality is a tough thing to do and a tougher thing to do well, Spirit Adrift have mastered it here.

Previous article
BAND OF THE DAY: BOYS OF FALL
Next article
KEEP AN EYE OUT