REVIEW: THE SOUTHERN RIVER BAND – LIVE AT THE PLEASURE DOME (2016) 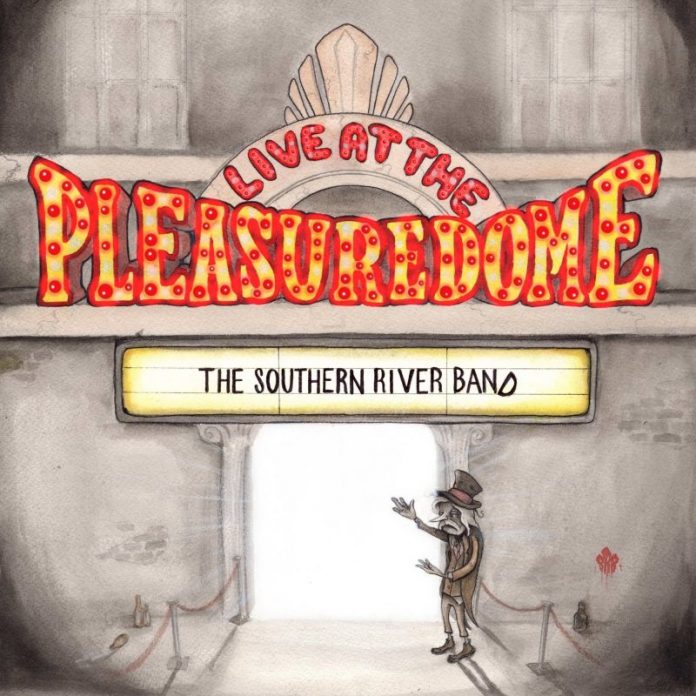 Australia is not keeping up its side of the bargain, really.

As I write this, its cricket team is getting hammered in a way it never used to (real shame that…) and it’s bands don’t sound like AC/DC anymore.

Ok I’m being facetious (note not about the cricket thing – that’s hilarious and I hope it made Shane Warne cry…) as the continent has always had the one of the most diverse rock n roll scenes around.  And Kylie (who this reviewer has had an unrequited love affair with for nigh on thirty years).

Moving on, pertinently to “Live From The Pleasuredome” (which brilliantly isn’t a live album at all) is a band called You Am I that MV could never understand why they weren’t massive over in the UK, and that type of sound is all over the eight wonderful songs that Perth’s The Southern River Band offer up here.

You have to love any record that begins with a disclaimer that suggests “we ask that all unnecessary items of clothing are removed” and manages a crescendo before anything has really happened, and there is much to love about “…..Pleasuredome”.

When it does get underway, the brilliant opening song “Pandora” kicks off with a guitar solo, which is always fun, and bursting to rock, it also adds a glorious harmony filled chorus to things, and there’s not been very many catchier songs than “Chasing After Love (‘ll Burn A Hole In Your Shoes) anywhere recently.

These songs live and die by their hooks, and there is so many of them that it is never struggling. There is a 1970s bent about this that nobody is denying, but it owes more to the likes of Cheap Trick than it does to Deep Purple and Led Zep and that is to its eternal credit.

The shimmering acoustics of “Through The Forest And The Lakes” are a blissful piece of happy music, while “Let It Ride” brings in some groove and strutting, almost Georgia Satellites barroom rock n roll, while “Summer Song” has its head down and is ready to go and as well as getting cowbell bonus points anyone who remembers the majesty of Redd Kross will find much to enjoy here.

“Pleasuredome” gets the balance right between its upbeat and balladry. “Little White” is a beautiful slice of blues infused melancholy, while “Coming Home” chugs along with business to do.

A magnificent record is concluded by “Two Times The Fool” which is simply nothing more than a classic rock song – but one which is a neat summation of everything that had gone before. The crunch, the harmonies, the harmonies and the strut and swagger – perhaps the natural confidence that all Aussies seem to have? – is all here.

It rounds off a brilliant collection. On this occasion, the pleasure is all ours.